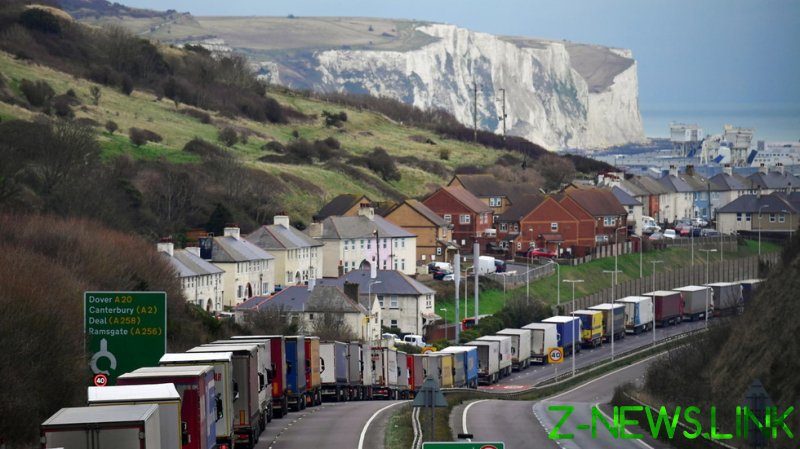 Britain is in crisis, a multifaceted one at that. Over the weekend, Prime Minister Boris Johnson announced that areas of London and south-east England would be placed under “Tier 4 restrictions,” or in other words, a total lockdown, following the revelation that a new mutation of Covid-19 has gained rapid traction. The new variant of the virus is reportedly 70 percent more contagious, and has been described as “out of control” by Health Secretary Matt Hancock.

If that wasn’t bad enough, a growing number of countries, including most of Europe, have subsequently responded to the development by blockading travel from the UK. Most alarmingly, this has also included incoming lorries and freight from the port of Dover into France via the Channel tunnel, the artery of Britain’s supply chains to the continent. Although it will not be a permanent measure, this has provoked serious warnings from politicians and supermarkets concerning potential food and supply shortages throughout the country.

Of course, all the talk about cargo delays, Calais and Dover sounds very familiar. Because in the background of this crisis is the looming deadline for Brexit trade talks between the UK and the European Union (EU). Johnson has repeatedly threatened a no-deal outcome if he does not secure preferential terms for Britain, and while there is some suggestion he may be bluffing as a negotiating tactic, suddenly this strategy doesn’t seem too smart on his behalf. Why? Because what is currently happening with Covid-19 is a taster of what a no-deal outcome will be like, and for the UK, it doesn’t look good at all. With potential shortages and national panic, the coronavirus crisis has just served to undermine the prime minister’s negotiating hand. Boris has failed the country on multiple fronts.

The entire logic of Brexit in its most dogmatic form is premised on the belief that the UK does not need to rely on the EU, and is, in fact, fundamentally “better off” as an “independent sovereign nation.” This attitude has thrived on a sentiment of national identity, rather than on geographic and economic realities. Britain is perceived to be “global,” born out of imperial nostalgia, rather than part of Europe, which is deemed to be separate and different. Stark warnings of potential repercussions from leaving the bloc have for years been dismissed under the popularised term “project fear” – and as the debate became polarised and toxified, many stopped listening.

The Conservative government has actively pushed a mantra of Brexit optimism: “This is going to be a fantastic year for Britain,” boasted Johnson in January, talking of potential new trade deals with far-flung countries which Brussels apparently got in the way of. As talks have approached the climax, with just 10 days left until the transition period comes to an end, he’s not hesitated from weaponising the threat of a no-deal, saying Britain will walk away and even subtly threatening to deploy the Royal Navy against France to protect fishing rights. Of course, it may play triumphantly domestically, but leaders on the continent have long deciphered that this isn’t really serious and that Boris is playing to the political gallery.

Now, he’s been made to look the fool. Brexit is one thing, but the prime minister’s utterly catastrophic approach to Covid-19 is another. European leaders must be laughing as Johnson has bluffed over a no-deal Brexit, only to see his virus mismanagement shut down Dover in the precise way his trade threats would do. It blows apart the fantasy that leaving without an agreement will be fine, and illustrates to the public just what beckons in that scenario, meaning that support for his position, and thus his negotiating hand, is seriously undermined. Brussels may now believe it can make him capitulate, not the other way round. The overlapping disasters of Covid-19 controls and a no-deal would serve a hammer blow to an already depleted UK economy, and his support would evaporate.

So, what does Johnson do now? The freight situation will not last for the long term and will eventually be resolved before it inflicts serious problems, irrespective of the spread of the virus at home. However, Brexit negotiations are going on simultaneously regardless. Now that Europe has shown that it can bring the UK economy to heel with collective action, Boris’ bluster isn’t going to wash. The prime minister may be inclined finally to compromise on EU demands at the last minute, or if the timing doesn’t suffice, even extend the transition agreement.

Of course, either of those options might also be politically destructive for him, but what choice does he have? This is a true case of the ‘Prime Minister’s New Clothes’ – initially going against Europe with tough rhetoric, when in fact he had nothing. Now everyone sees the naked truth for what it is, and it’s not a pretty sight.