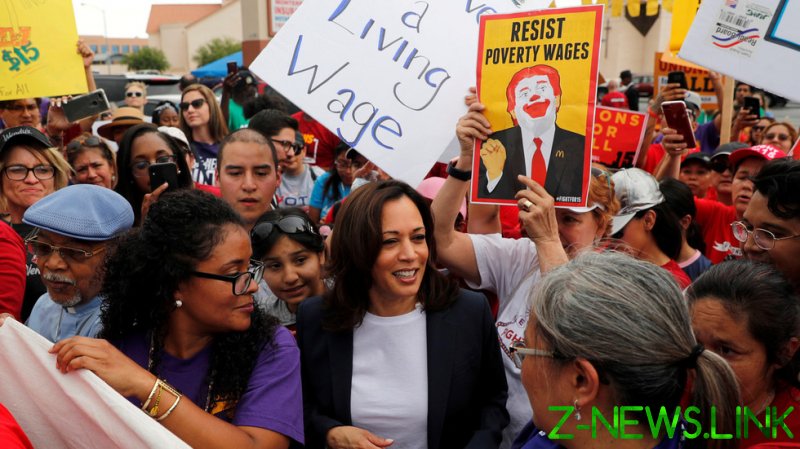 Senate Parliamentarian Elizabeth MacDonough ruled last week that a Democrat-proposed provision hiking the federal minimum wage to $15 per hour could not be tacked on to the Biden administration’s $1.9 trillion stimulus bill. MacDonough, a Democrat who acts as a sort of referee in the upper chamber, declared that a wage hike would not fall under budget rules, and as such could not be passed with a simple majority, unlike the rest of the stimulus package.

In a letter to President Joe Biden and Vice President Kamala Harris on Monday, California Rep. Ro Khanna (D) and a collection of progressives – among them Alexandria Ocasio-Cortez (D-New York) and Rashida Tlaib (D-Michigan) – pleaded with the administration to overturn the technical hurdle and attach a wage increase to the bill.

“Eighty-one million people cast their ballots to elect you on a platform that called for a $15 minimum wage,” Khanna wrote. “We urge you to keep that promise.”

Harris, who presides over the Senate, could easily overturn MacDonough’s ruling. Gerald Ford’s vice president, Nelson Rockefeller, did just that when he overturned then-parliamentarian Floyd Riddick in 1975 to change the Senate’s filibuster rules. Vice President Hubert Humphrey did the same in 1967, also to lower the filibuster threshold from two thirds to three fifths.

However, the Biden administration has not signalled any interest in doing so. White House Press Secretary Jen Psaki told reporters last week that Biden was “disappointed” in the parliamentarian’s ruling, but would respect it. Biden’s refusal to push for a wage hike angered the progressive wing of the Democratic Party, as did his decision to include $1,400 relief checks, rather than the $2,000 he promised on the campaign trail. Harris has remained tight-lipped on the idea as well, despite campaigning with advocates for a $15 minimum wage during her own bid for the presidency last year.

“The most powerful man in the world is cowering in fear of a parliamentarian and pretending he has no power to pressure lawmakers of his own party to pass a $15 minimum wage. That’s a lie,” David Sirota, a former adviser to Sen. Bernie Sanders, tweeted on Sunday.

“We’ve been asked, politely but firmly, to compromise on nearly all of our principles and goals,” Khanna said in a statement on Monday. “Not this time. If we don’t overrule the Senate parliamentarian, we are condoning poverty wages for millions of Americans.”

Biden is between a rock and a hard place here. Inserting the wage increase would make the bill unpalatable for Senate Republicans, who argue that wage hikes favor only large corporations who can afford to pay them, and penalize small businesses. However, moderate Democrats like West Virginia’s Joe Manchin and Arizona’s Kyrsten Sinema would also likely balk at such a progressive move. Failing to insert the increase risks further alienating progressives, who already feel left out of the Biden administration’s rush to return to the Obama-era status quo.

Even in its present iteration, the bill faces an uphill battle in the Senate. With the chamber split 50-50, a single Democratic defection would prevent its passage. As such, it will likely be debated and passed back and forth between the House and Senate until a workable version reaches Biden’s desk.