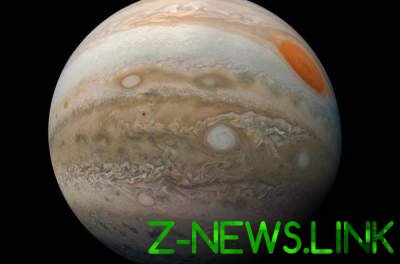 In the picture you can see the Great red spot.

Station “Juno,” which deals with the study of the Jupiter system, transmitted to Earth a new picture of the gas giant. As reported on the Agency’s website, the picture was taken on February 12 when “Juno” was made 17 closer to Jupiter.

To image the station took three shots. At the time of shooting she was at a distance from 26900 to 95400 miles from the peak of the clouds of gas giant.

In the picture you can see the famous Great red spot and turbulent region in the southern hemisphere of Jupiter.

“Juno” was launched on 5 August 2011 from Cape Canaveral, Florida (USA), it is part of the program, New Frontiers . To “Juno” on the orbit of Jupiter worked the Galileo probe, but “Juno” was the first in history to make a flyby of the planet through its pole.

See also:  Refuted theory about the existence of life on nearby exoplanets

The unit arrived at the orbit of Jupiter on 4 July 2016. He will stay in orbit for several more years and will transmit to earth photographs. After completion the probe will be destroyed.