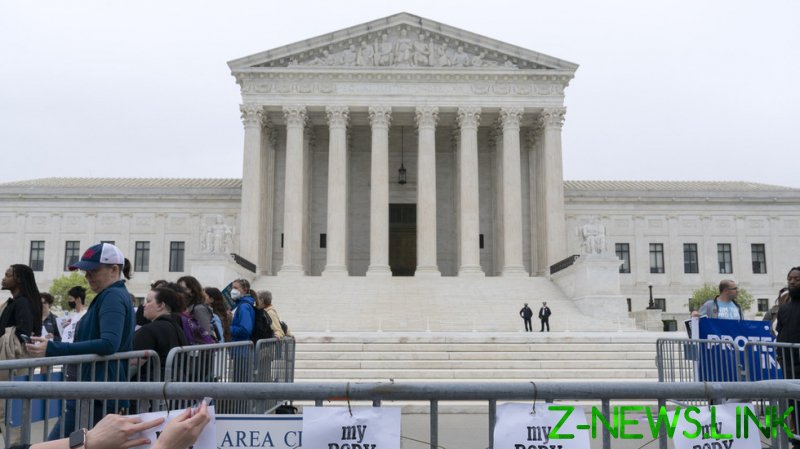 Supreme Court Chief Justice John Roberts has ordered the court’s marshal to investigate the source of a leaked draft opinion showing that its justices would imminently strike down the landmark Roe v. Wade ruling. Conservatives suspect that a liberal clerk leaked the document to generate public outcry and force the court to backtrack.

“Yesterday, a news organization published a copy of a draft opinion in a pending case,” Roberts, a conservative, wrote on Tuesday.

“To the extent this betrayal of the confidences of the Court was intended to undermine the integrity of our operations, it will not succeed,” he continued. “The work of the Court will not be affected in any way.”

Politico on Monday published the draft decision, which stated that the court had voted by 5-3, with one vote undecided, to overturn Roe v. Wade, a 1973 ruling that guaranteed the absolute right to a first-trimester abortion and limited rights in the second. A 1992 ruling upholding Roe v. Wade – Planned Parenthood v. Casey – would also be overturned.

Writing the majority opinion, Justice Samuel Alito declared that the US Constitution offered no right to abortion, and that Roe v. Wade rested on an “egregiously wrong” and “exceptionally weak” interpretation of the country’s founding document. Striking down this ruling would “return the issue of abortion to the people’s elected representatives” on the state level, he wrote.

Conservative lawmakers and pundits view the leak as a calculated effort by a liberal staffer within the court to force the abortion debate into the open and generate public outrage, potentially motivating the court’s justices to change their minds, or Congress to legislate on abortion rights.

“This was a singular and egregious breach of that trust that is an affront to the Court and the community of public servants who work here,” Roberts continued, adding that he has “directed the Marshal of the Court to launch an investigation into the source of the leak.”

The leak was unprecedented for an institution that operates mostly behind closed doors. While the 1973 Roe v. Wade ruling was leaked to the press, it was published mere hours before being announced by the court and had already been finalized. This time around, the court is not set to issue its final ruling in the Mississippi case that brought Roe v. Wade before it until June.

Prominent Democrats, including the governors of California and New Jersey, have already announced plans to pass abortion rights legislation on the state level, while President Joe Biden has called on “elected officials at all levels of government to protect a woman’s right to choose,” adding that he would sign potential legislation codifying Roe v. Wade into federal law.