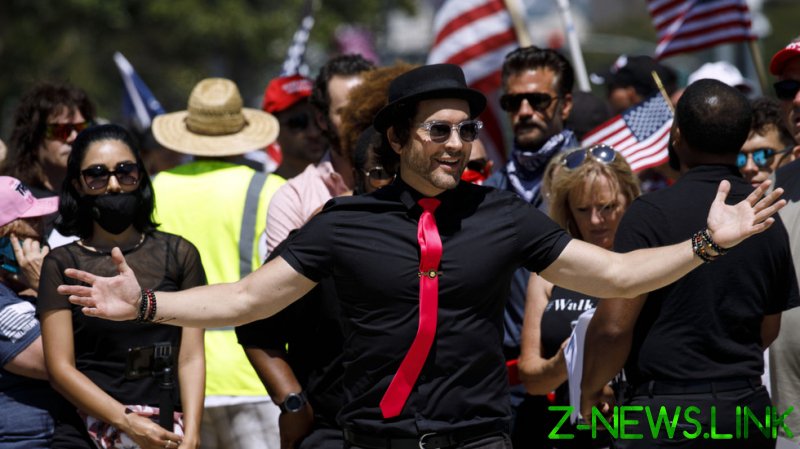 The ‘WalkAway’ organizer was taken into custody on Monday after being charged on three counts related to the unrest in DC on January 6, including impeding a police officer during civil disorder, knowingly entering or remaining on restricted grounds without authority and engaging in disorderly conduct “with intent to disturb a hearing of Congress,” according to the FBI’s Omaha field office.

While an eight-page criminal complaint against Straka does not accuse the conservative activist of entering the Capitol during the riot, it claims he was part of a crowd rallying at the entrance of the building and urged other protesters to go inside, all of which was captured in footage posted online.

The FBI was tipped off to Straka’s presence at the Capitol by a family member, according to the complaint, who pointed federal agents to the video footage, in which Straka is purportedly heard telling demonstrators “Go, go!” as they attempted to storm the building, as well as calling on others to strip a police officer of his riot shield, shouting “Take it! Take it!” Straka, however, remains outside of the building for the entirety of the video, which he allegedly posted to Twitter himself but later deleted.

The activist is not the first Capitol riot suspect to be turned in by a relative, with the teenage son of a Texas man tipping off the FBI to his father’s involvement in the unrest earlier this month, earning him adoration in liberal circles and at least $87,000 in donations. It remains to be seen whether Straka’s family member-turned-informant will receive the same accolades.

Straka, 43, is a self-described “former liberal” best known for his founding of the WalkAway campaign, which encourages progressives to abandon the Democratic Party, arguing the org represents “fake news,”“race-baiting” and a “victim narrative.” Largely through social media, his group rose to prominence during the 2018 midterm elections, fundraising for Republicans and later organizing rallies for Donald Trump’s reelection bid. In the wake of the Capitol riot earlier this month, however, WalkAway’s 500,000-follower Facebook page was purged from the platform over policy violations. Straka’s personal account, as well as those of the entire WalkAway team, were also swept up in the aggressive ban campaign, which has seen thousands of other pages removed across multiple social media sites following the unrest – including those of former president Trump.

Straka remains in federal custody and his first appearance in court will come on Tuesday, according to the FBI.