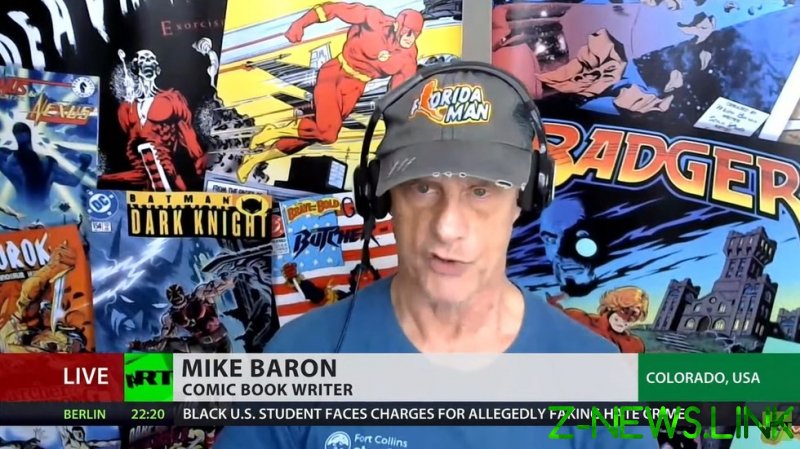 Baron previously claimed that he had been repeatedly prohibited by Facebook to post advertisements for the book, while Reddit’s r/comics subforum banned a link to an interview with Baron, claiming the discussion of the comic broke policies on “misinformation and racism.”

Facebook told the writer he had to go through an authorization process to post on “social issues.” While the award-winning author of ‘The Punisher’ has since followed through the procedure, he told RT that he has yet to see if he gets the green light.

“They refused to run the ad initially. I have to check and see if they still refuse because they’re on the back heel lately, and not so dogmatic,” Baron told RT.

In the offline world, his book has also run into obstacles. Baron told RT that “every major publisher” turned down his work, with some even making “vulgar” responses.

“Most of these publishers are what we call ‘woke’, which means that they subscribe to the new narrative, and one of the narratives is that police are bad, which is absurd of course, because civilization depends on the rule of law,” he said.

The writer also blamed the treatment of his book on the ‘wokeness’ of Big Tech, accusing American technology companies such as Facebook and Reddit of adhering “to the official narrative,” which condemns ‘toxic masculinity’.

In his previous interviews Baron spoke of his book as a response to the 2020 Black Lives Matter rots and calls to defund law enforcement. The protests against police brutality in support of racial justice took place across the US, often spiraling into vandalism, looting and riots. They also led to forces in major cities being stripped of power and funding amid a surge in crime.

“Downtown Manhattan, Los Angeles, San Francisco, Portland, Seattle, Minneapolis… these are some of the towns that have been turned into ghost towns because people are afraid to go down there,” Baron argued, noting that relaxed law enforcement in urban areas had resulted in a rise in theft and business “fleeing the cities.”

“And I can’t blame them,” he concluded. “I say let every productive citizen leave the city.”