Home / WORLD / Pro-lockdown Pope gets political on Covid-19 again, condemns those who traveled over the holidays despite pandemic

Pro-lockdown Pope gets political on Covid-19 again, condemns those who traveled over the holidays despite pandemic 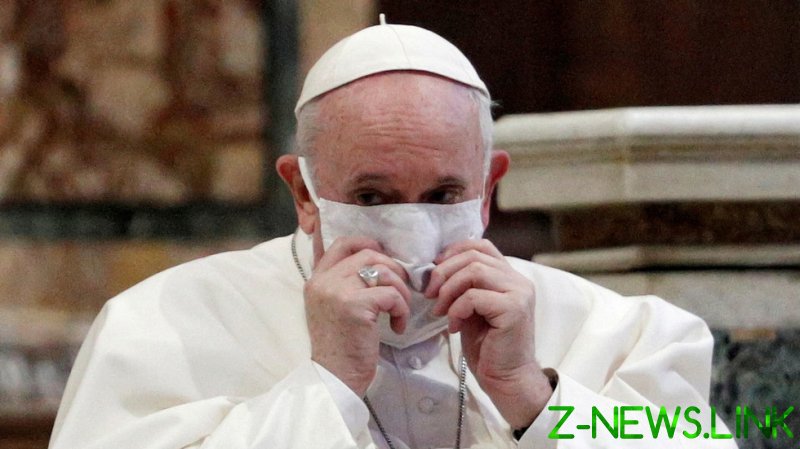 “They are good people, but they didn’t think about those who were staying at home, of the economic problems of many people who have been hit hard by the lockdown, of the sick people,” the Pope said Sunday in his weekly address at the Vatican. He added that travelers thought “only about going on holiday and having fun. This pained me a lot.”

Pope Francis has frequently spoken out on Covid-19 policies, as well as behaviors during the pandemic. His new book, published on December 1, praised countries that imposed strict economic lockdowns to deter the spread of the virus and blasted governments that “shrugged off the painful evidence of mounting deaths, with inevitable, grievous consequences.”

He also has criticized those who protest against Covid-19 restrictions or refused to wear masks, saying they’re in “their own little world of interests.” He campaigned in his Christmas message in December for governments to make Covid-19 vaccines available to everyone – cooperating globally, rather than competing for supplies.

The Pope returned to the theme of unselfishness on Sunday, saying, “We don’t know what 2021 will have for us, but together we can work a bit more to take care of each other and of creation, our common home.

There is a temptation sometimes just to take care of our own interests.”

The call did not strike chord with many on social media, with critics suggesting the Pope should focus on the matters that have plagued the Catholic church itself, like rampant sexual abuse by the clergy.

Others argued that shutting everyone in isn’t necessarily beneficial or merciful to mankind. “If people in Mexico’s tourist areas don’t work, they die,” one observer said. Another tweeted, “I own a business here that’s been ordered closed. If it doesn’t open, it’ll die along with 10+ years of work, blood, sweat and tears. Who should I thank and what should I eat?”

However, some commenters seconded the Pope’s statement. “These people are plain selfish,” one observer tweeted. “Why can’t their normal life be put on hold for just one year for the betterment of everyone?”