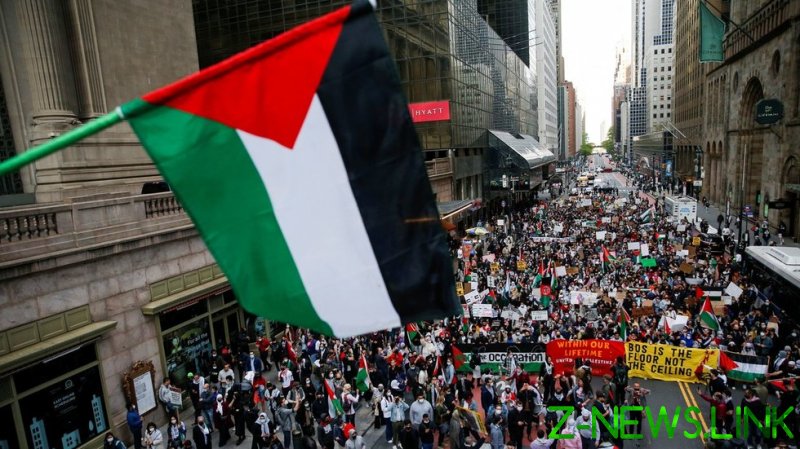 Hundreds of protesters gathered outside the Israeli consulate-general on Second Avenue on Tuesday, as the IDF bombed Gaza and Hamas and Islamic Jihad launched hundreds of rockets into Israel.

A local videographer captured a moment when several young men got into a fistfight, cursing each other out in Arabic and Hebrew, as a group of NYPD officers wearing facemasks tried to pry them apart.

Another video showed a group of young women in hijab walking past a fenced-in area with pro-Israel protesters. As one of them, a woman holding Israeli flags, was telling a journalist that “we have a lot of things in common,” the group chanted “Free free Palestine” and one of them told the journalists, “You’re getting the wrong story.”

They proceeded to heckle a group of demonstrators waving Israeli and US flags, separated from them by a metal fence.

There were protests in other US cities as well. Demonstrators in Washington, DC built a float in the shape of a tank and chanted calling Israel a “terrorist” and “racist” state.

The most recent violence began as Israeli police clashed with Palestinians protesting the eviction of several families from the Jerusalem neighborhood of Sheikh Jarrah, in favor of Israeli settlers. Over the weekend, hundreds were injured as protests took place outside the Al Aqsa mosque, on Jerusalem’s Temple Mount.

Palestinian militant groups Hamas and Islamic Jihad launched rockets into Israel on Monday, and continued the barrage on Tuesday after an Israeli airstrike on Gaza demolished a 12-story high-rise.

While Israeli security forces clashed with Palestinian protesters in the West Bank, for the first time in decades Israeli Arab citizens rioted in towns such as Lod, Acre and Nazareth, prompting the authorities in Tel Aviv to redeploy troops and declare a state of emergency.