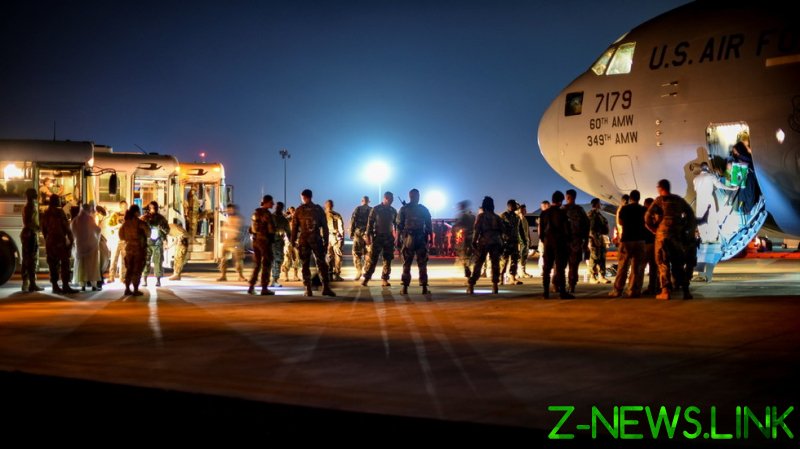 The flight – one of three intended to carry 1,000 Afghans to Uganda chartered by businessman George Abi-Habib – was seen virtually empty as it took off from the Kabul airport on Tuesday night. The barren cabin was seen in a photo shared online by CNN’s Alexander Marquardt, who noted that many of the would-be passengers were “blocked by the US and Taliban” and not allowed to board.

Abi-Habib, co-founder of the Sayara International development firm based in Washington, DC, told the Wall Street Journal that American Marines working security at the gates of the airport had refused to allow Afghans through, even when they could prove they had a seat reserved on the plane. Abi-Habib said that one passenger had to squeeze through a sewage drain to reach the airstrip, saying “we can’t expect everyone to crawl through a sewer pipe to safety.”

While efforts were made for days to fill more of the plane’s empty seats, the businessman said at one point the window to leave was closing, and decided to depart with just 50 passengers.

A separate 240-person charter flight destined for Ukraine also had to leave with around 70 empty seats due to US troops denying entry to passengers, according to the Journal.

Humanitarian workers with FEMENA – an organization dedicated to supporting “women human rights defenders (WHRDs), their organizations and their movements” in the Middle East, North Africa, and Asia – have also reported difficulties getting Afghans past US security.

The group’s director, Sussan Tahmasebi, also cited a post by the Atlantic Council’s Holly Dagres, who pleaded for US soldiers to allow 125 Afghans, more than half of them children, into the airport, saying “they have secured flights and have passports/docs, but aren’t being let in.”

The photo of the nearly empty flight out of Kabul coincided with reports that security contractor Erik Prince, formerly of the infamous mercenary firm Blackwater, was charging $6,500 per head for private flights out of the war-torn nation. While many observers online assumed the two stories were related, Marquardt later clarified that Prince had no connection to the flight arranged by Abi-Habib.

More than a full week after Kabul fell to Taliban fighters in a major coup de main, the city’s airport remains surrounded by massive crowds of Afghans and foreigners looking to flee the country. According to a Western diplomat cited by Reuters on Thursday, around 1,500 US passport- or visa-holders were still unable to enter the airport, though he added that flights are expected to pick up after slowing down the day prior.

Amid the chaotic evacuation effort, US officials have increasingly sounded alarms about the potential for a terrorist attack from the likes of “ISIS-K,” the name given to the Islamic State faction in Afghanistan. While no evidence has been offered to date to indicate an imminent attack, CNN cited an unnamed Pentagon official on Wednesday who warned of a “very specific threat stream” linked to ISIS-K strikes on the airport. The Taliban has frequently battled with ISIS-K since the cell emerged around 2015, in some cases even receiving American air support in the process.

The latest security scare came on Wednesday, when the US Embassy in Afghanistan issued an alert warning of “threats outside the gates of Kabul airport,” also urging all American citizens at three particular airport gates to “leave immediately.” Though similar alerts were issued by British and Australian authorities, the exact reason remains unclear.

US President Joe Biden has vowed to complete the evacuation mission by August 31, but given the difficulties so far, it remains unclear whether all American citizens and foreign allies will be out of the country by that date. The White House, however, has noted that it has “contingency plans” to stay longer if needed, despite the Taliban insisting on the August 31 deadline.