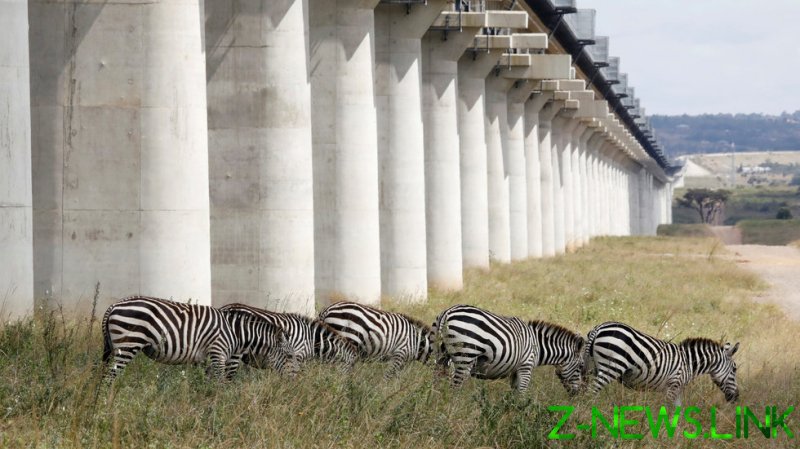 The animals escaped from a farm in Prince George’s County last week and have yet to be returned home, said Rodney Taylor, chief of the county’s Animal Services Division. He noted the agency has received at least five zebra-spotting calls from concerned locals since last week, as the animals continue mosey through a semi-rural area of the county.

As if the ongoing ‘zebra getaway’ story wasn’t amusing enough, Washington, DC Congresswoman Eleanor Norton (D) added another layer of intrigue with a tongue-in-cheek statement on Friday – seemingly unprovoked – denying “charges” that she had set the animals “free” and insisting she had an “alibi.”

“Local news has reported that the zebras were let loose on Saturday or Sunday of last weekend, a period of time during which I was enjoying quiet time at home with family. My alibi is solid,” Norton said, adding that the “charges are understandable” given that she has “been known to oppose unnecessary fences.”

Some critics on social media remained unconvinced, however, with one noting that Norton’s statement is “exactly what someone who let six zebras loose from the zoo would say.” (The congresswoman erroneously said that six, rather than five, zebras had escaped.)

Other observers were utterly baffled by the Zebra-gate controversy, apparently believing Norton’s statement-in-jest was a sincere denial of allegations.

While the Animal Services Division has devised a plan to coax the animals back to the farm in partnership with their owner, Taylor explained that wrangling rogue zebras is no easy task.

“You can’t hunt them down. They’re just too fast, they run, they won’t let you get near them,” he told a local media outlet, adding, however, that their plan is working and is slowly “winning their confidence.”

We do have a feeding station set up…They are eating there every morning between 2am and 4am.

The feeding station was set up near the farm, though Taylor declined to reveal its location for fear that locals would try to approach the animals and potentially frighten them away. “If you spook them, you’re just pushing them further out. And that’s when it can get dangerous, they can get out on the highway, [and other] things can happen,” he said.

The zebras are owned legally under a permit from the US Department of Agriculture. In total, 39 zebras (known collectively as either a “dazzle” or a “zeal” in zoological parlance) reside on the farm, located near the small town of Upper Marlboro. All of them were delivered only recently, said Taylor, who added that the farm has housed exotic animals in the past, and has seen only one other escape over the last 15 years.

Despite their failed efforts to date, the farm owner and Animal Services Division will continue attempting to coax the zebras back home, hoping to slowly wall off the area around the feeding station and enclose the animals. They will then be tranquilized in order to be returned to the farm safely, Taylor said.