Home / WORLD / ‘President will be happy to show up’: White House calls on CDP to reinstate cancelled October 15 debate

‘President will be happy to show up’: White House calls on CDP to reinstate cancelled October 15 debate 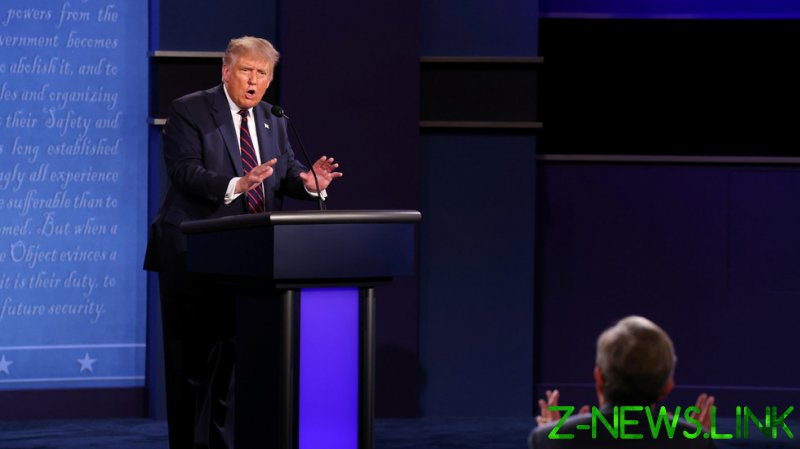 “It would be nice if the commission would get the debate back on the schedule. I think the president is ready to go. He wants to be on stage debating Joe Biden in person,” White House Deputy Press Secretary Brian Morgenstern told the media on Sunday.

Morgenstern added that he believes that Trump “will be happy to show up” to trade verbal blows with the Democratic challenger.

Trump’s campaign spokesman Tim Murtaugh earlier accused the commission of bias, suggesting Trump and Biden should sideline the CPD “overlords” and agree to “one-on-one” debate without what he called the “interference” of the commission.

The CPD cancelled the October 15 debate, which was set to become the second one out of three planned face-offs between Trump and Biden in the run-up to the November election, on Friday.

On October 8, a week after Trump tested positive for the coronavirus, the commission made a surprise decision to take the debate online “in order to protect the health and safety of all involved.”

The move did not go well with Trump who refused to participate in the debate as long as he and Biden are not on the same stage, while the Democratic hopeful said that did not mind the virtual town hall.

The Trump campaign argued the online format favors Biden, with Murtaugh claiming that the CPD is “protecting” the former VP, presumably, from POTUS’ verbal onslaught.

Since then, Trump, who spent four days in the Walter Reed Medical Hospital before being discharged on Monday, has been cleared by White House physician Sean Conley to resume public engagements. In a letter on Saturday, Conley stated that Trump was no longer “a transmission risk.”

On Sunday, Trump, who is set to hit the campaign trail on Monday with a “big” rally in Florida, tweeted  that he was “immune” to the virus. The tweet, however, was slapped with a “potentially harmful information” tag by Twitter.

At present, it’s unclear if a person who has once had the virus can be reinfected again, and how much time should pass since the first infection for it to become a possibility.