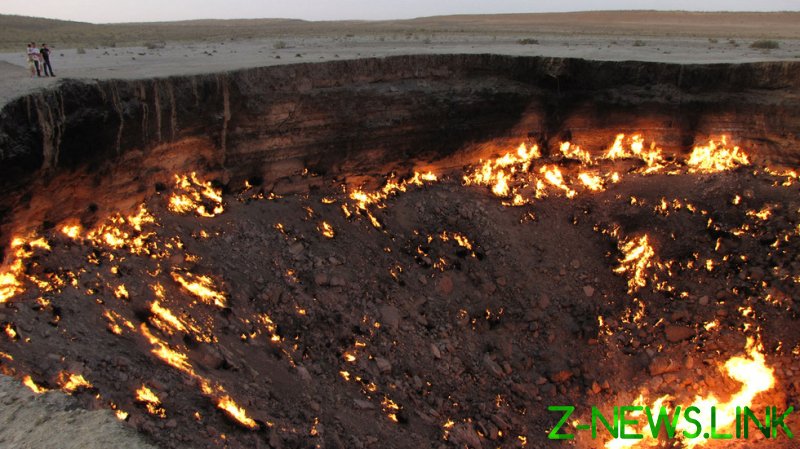 Turkmen President Gurbanguly Berdymuhamedov has ordered his government to find a way of extinguishing an apocalyptic -looking gas crater that has been burning in the Karakum desert for the past 50 years.

The “feature” located near the village of Darvaza, some 270km from Turkmenistan’s capital of Ashgabat, is officially called ‘The Radiance of Karakum’, but the locals usually refer to it as ‘The Gates to Hell’.

The 60-meter-wide pit is man-made, formed as the result of a ground collapse during gas exploration back in 1971. It was set on fire deliberately over fears that poisonous gas could threaten people and wildlife in the area.

It was expected to burn out swiftly, but the crater is somehow still spewing flames to this day, providing for a scary but truly picturesque phenomenon.

‘The Door to Hell’ has become one of the Central Asian nation’s best-known landmarks internationally. However, tourism hasn’t exactly been booming in Turkmenistan, which is visited by fewer than 10,000 foreign guests each year.

This may have been a key consideration behind the decision to extinguish the flames by the extravagant President Berdymuhamedov, who raps, flies helicopters, drifts in race cars, and loves showing off his shooting skills. These activities have been met with some ridicule abroad.

During an online meeting with the government on Friday, he argued that the country was losing valuable natural resources, which could otherwise be sold abroad and the money used to improve the wellbeing of the Turkmen citizens. The burning gas was also harmful to the people and the environment, the head of state added.

Berdymuhamedov told the deputy PM in charge of the oil and gas industry to organize discussions with scientists, including foreign experts, to figure out how to deal with the flames.

However, it’s unclear whether this will finally shut ‘The Gates to Hell’, as the president previously issued a similar order in 2010, but it couldn’t be fulfilled.