President of Turkmenistan famously raced on a race track. Video 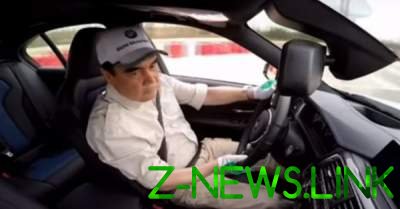 The head of the Republic has decided to personally test machines to test their performance, and drove on the race track

President of Turkmenistan Gurbanguly Berdimuhamedov made a drift on BMW M3 during a visit to the national Center of automobile sport. The corresponding video published portal “Chronicle of Turkmenistan”.

According to the news Agency “Turkmenistan today”, informed the interior Ministry of Turkmenistan has purchased for the center of the new race cars. The head of the Republic has decided to personally test machines to test their performance, and drove on the race track.

It is noted that in teenage years Berdimuhamedov was involved in Motorsport and competed in various competitions. Turkmen President participated in the first competitive races held in the Motorsport Center, which opened in September 2013.

Earlier in November, the network appeared the video, in which Berdymukhamedov has shown the ability to play basketball on the bike. First, the President has fulfilled a number of exercises on the equipment installed in the gym. Then he got on the bike and made a few passes to the basketball Hoop, throwing the ball in the basket.