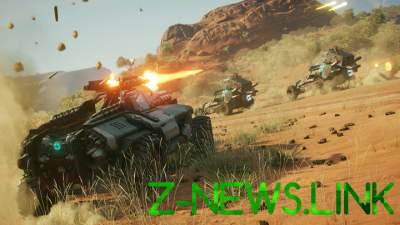 The video showed the combat system of the game – including the battle on the transport, and told about the setting.

2018 at QuakeCon id Software and Avalanche Studios came out with a new gameplay video of first-person shooter Rage 2, largely repeating what we already saw at E3 in June 2018.

The post-apocalyptic shooter events occur 30 years after the first part. Open world divided into several zones with dramatically different landscape and climate. We have to take on the role of the Walker – the last Ranger of the wastes from Vaynlend (Vineland), lands that the main character with his companions were forced to flee after the attack of a powerful faction of the Authority. Only Rage 2 is the number of different factions, but the video showed only five: cybermutt from the Government, crazy bandits from the Goon Squad, criminals with the technique of the Immortal Shrouded and River Hogs and Abidon Mutants.

See also:  For the game The Witcher will take the series

The battle on the machines in the spirit of “Mad max” will be one of the features of the project – there is a veritable fortress on wheels. In it the main character will be a car full of weapons, called “Phoenix”.

Recall that Rage 2 is created on the basis of the graphics engine Apex, and its output must be held before the end of next year in versions for PlayStation 4, Xbox One and PC.