Home / WORLD / Prescient, much? Bin Laden once plotted to kill Obama, as he thought a Biden presidency would create chaos and aid the Taliban…

Prescient, much? Bin Laden once plotted to kill Obama, as he thought a Biden presidency would create chaos and aid the Taliban… 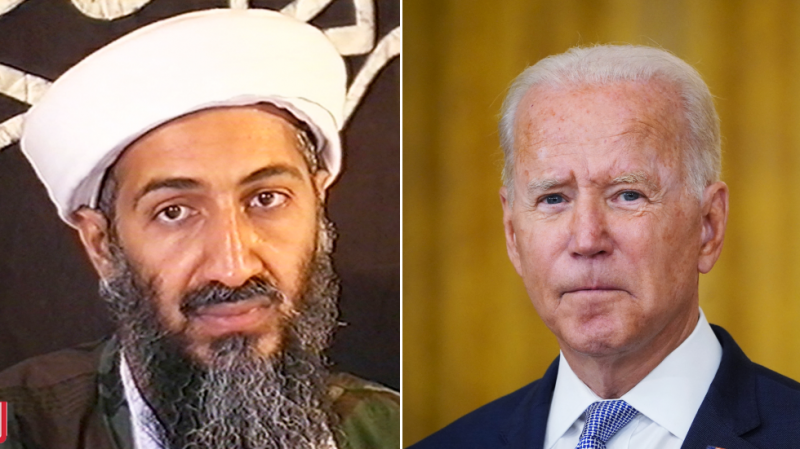 In May 2010, the leader of Al-Qaeda, Osama Bin Laden, wrote a remarkable letter to one of his acolytes. In it, he urged his lieutenant to plot to kill President Barack Obama, because a Joe Biden presidency would result in a “crisis”, as the then vice-president was “totally unprepared for that post.”

The assassination attempt on Obama’s life was to be made by two teams of terrorists, who would also target General David Petraeus, then head of the US Central Command, if either man visited Afghanistan or Pakistan. Here is the relevant part of the startling letter, which was seized from Bin Laden’s compound by US troops and has been written about before, and is published on the website of the West Point Military Academy’s Combating Terrorism Center:

“I asked Shaykh Sa’id, Allah have mercy on his soul, to task brother Ilyas to prepare two groups – one in Pakistan and the other in the Bagram area of Afghanistan – with the mission of anticipating and spotting the visits of Obama or Petraeus to Afghanistan or Pakistan to target the aircraft of either one of them.

“They are not to target visits by US Vice President Biden, Secretary of Defense Gates, Joint Chiefs of Staff (Chairman) Mullen, or the Special Envoy to Pakistan and Afghanistan Holbrooke. The groups will remain on the lookout for Obama or Petraeus.

“The reason for concentrating on them is that Obama is the head of infidelity and killing him automatically will make Biden take over the presidency for the remainder of the term, as it is the norm over there. Biden is totally unprepared for that post, which will lead the US into a crisis. As for Petraeus, he is the man of the hour in this last year of the war, and killing him would alter the war’s path. So please ask brother Ilyas to send to me the steps he has taken into that work.”

Before we go any further, I want to make it clear that I am no apologist for either Bin Laden and his crack-pot cult, or his warped ideology. Indeed, I was probably the most outspoken mainstream UK politician about how we should have no truck with extreme Islamists, and for that I was pilloried by the left, unfairly in my opinion.

However, the fact that Bin Laden was prepared to call his attack dogs off Biden is telling. He clearly wanted to see President Obama and General Petraeus, who the following month became the overall commander in Afghanistan, dead. Yet he would not countenance an attack on Biden. And why was that? Could it be that Bin Laden suspected, even back then, that Biden was the weak link in the chain?

After all, Biden was opposed to President Obama’s troop “surge” in 2009, which was designed to protect Afghans from Taliban attacks through the deployment of an extra 17,000 US troops. Although the success of the “surge” is somewhat debatable, Biden’s opposition is not. Brett Bruen, a former member of Obama’s National Security Council, remembered that, “Biden was pretty darn clear on Afghanistan… he said we should get the heck out of there.” It was revealed last year that Biden was also opposed to the Special Forces operation that eventually took out Bin Laden in 2011 (and recovered the Bin Laden letter, among other documents).

Bin Laden was clearly determined to see Biden in the White House because he thought the VP was completely out of his depth more than a decade ago. It also must be taken into consideration that this was when Biden was still lucid and could make coherent arguments, which is sadly not the case today with the 78-year-old. Biden may well have been right or wrong back then, but at least he was clear-headed when airing his opinions.

Today, Biden is clearly incapable of holding his train of thought. So much so that he dodged journalists’ questions following his speech on Tuesday, with the most likely reason being that he could not use his pre-prepared prompt cards. So instead of answering journalists’ questions off-the-cuff, as Trump did on a weekly basis, he chose to do a sit-down interview with Bill Clinton’s former White House Communications Director, George Stephanopoulos, on ABC.

I hate to say it, but it is undeniably true that what a prescient Bin Laden predicted 10 years ago has come true: Biden being president has caused a crisis, and one that has been to the Taliban’s favour. As to his being ‘totally unprepared’ for the top job, well, even the president’s fiercest supporters cannot deny that he has made a complete mess of the withdrawal from Afghanistan. The sight of poor Afghans hanging on to the wheels of a US Air Force plane scuttling out of Kabul airport, and then falling from the sky to their deaths, will forever be remembered.

I never thought that Biden would serve a full term, and I am now convinced after this self-inflicted “crisis” that he will not even lead his party into next year’s midterm elections. His approval ratings were collapsing even before the Afghanistan debacle, and, with his health clearly failing, I would not be surprised if his party pressed the eject button and had him replaced by his VP, Kamala Harris, sometime soon.

I don’t have much faith that this outcome would be better for the world, but it surely could not be worse.