Premiere of Vampire: The Masquerade — Bloodlines 2 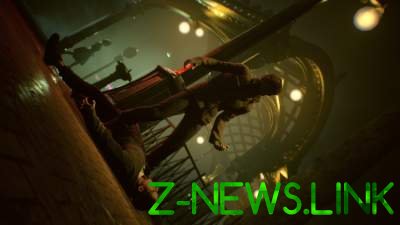 The plot takes the game to Seattle.

At the game developers conference GDC 2019 publisher Paradox Interactive and Studio Hardsuit Labs announced role-playing game Vampire: The Masquerade – Bloodlines 2, the continuation of the story in the universe of World of Darkness. The game is in development and will be released for PC and consoles in March 2020. Interestingly, in the PC version announced support for hybrid rendering based on ray tracing and the intelligent anti-aliasing NVIDIA DLSS.

In Bloodlines 2, we promise fast-paced plot, dynamic battles in melee and mysterious characters, each of which will have their own ulterior motives. The player can become a higher vampire, out to the streets in search of victims to take part in political intrigues and try to find a balance between an insatiable thirst for blood and the remnants of humanity.

See also:  Gamers are going to boycott For Honor

According to the story, turned during the vampire rebellion the main character becomes the cause of the bloody war between the factions that control the Seattle. To survive, he’ll have to join one of the clans (each with its own history and unique characteristics) and try to understand the complicated system of alliances with rival factions in the world that responds to any action.

During the game you will meet as the old founding clan, located in the city of his birth, and the new characters who set their own rules, having adopted modern technology. The player will have supernatural powers, but will need to comply with Masquerade – the Supreme law of privacy, through which the world of vampires has a secret about yourself.

See also:  The premiere of the film Overlord - perhaps this "monster 4" - will take place on Halloween!

Leading writer Bloodlines 2 acts the author of the original game Brian Mitsoda Bloodlines (Brian Mitsoda), so we can hope that fans waiting for a worthy sequel. Also promised that the players will meet some of the characters from the first part.

Despite the rather distant the time of release, the developers have opened taking pre-orders Vampire: The Masquerade – Bloodlines 2 (including the publishing Blood Moon Edition that includes the season pass, Season of the Wolf).