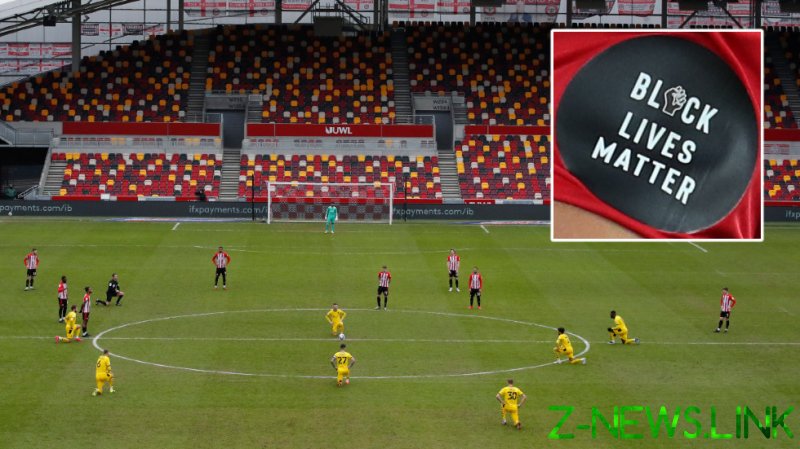 The sight of squads taking a knee before kick-off has been a feature of elite matches in England since last summer, but its value has become increasingly questioned against a backdrop of escalating racism against players on social media.

On the same day as Crystal Palace winger Wilfried Zaha attacked the authenticity of some public efforts to genuinely curb the problem, players from the contenders in the second-tier Championship revealed that they would drop the move with immediate effect ahead of their match on Sunday.

“We have been taking a knee before games since June but, like many of our fellow players at other clubs, no longer believe that this is having an impact,” they said in a statement made after “lengthy discussions“.

“We believe we can use our time and energies to promote racial equality in other ways.

“We have experienced racist abuse first hand and have also seen some appalling comments made to other players past and present.

“There is a clear need to continue to push for an end to all discrimination and, as players, we will be part of that at Brentford FC, in football in general and in the wider community.

“Togetherness is one of our key values as a group and plays an important role in helping us move towards reaching our goals. Racism is the opposite of what we stand for.

“As players, we will show our commitment to togetherness and racial equality on and off the pitch between now and the end of the season, and beyond. We will also support our colleagues at other clubs that still want to take a knee before games.”

Jon Varney, the club’s chief executive, reiterated that the move had been a collaborative decision between the playing staff and club hierarchy.

“Taking a knee is just one way our players have been showing their commitment to racial equality,” he said.

“We have been very clear in our ambition to be the most inclusive club in the country and our players want to and will play a big part on this journey.”

The discourse around racism in football has sharply changed in recent weeks following a seemingly endless procession of vile attacks on players including Chelsea and England defender Reece James and several Manchester United stars via social media.

Organizations including the FA have implored bosses at platforms including Facebook, Instagram and Twitter to take action, with many warning that change is unrealistic unless stronger measures are enforced.

Responding to Brentford’s observations about kneeling being ineffective, one respondent said: “Of course it isn’t.

“No question that there is a major racism issue but players kneeling down for a few seconds before a game isn’t going to solve it. Social media platforms need to take the first step by implementing adequate controls.”

Others strongly disagreed. “It clearly does have an effect,” said one reader who felt that Brentford had blundered.

“The fact people are getting mad at kneeling for a few seconds is embarrassing and completely proves its importance.”

Another argued: “It may not directly solve [the issue] but it also doesn’t damage it. It just brings racists out of their woodwork and keeps us all understanding there’s still a massive problem.

“It’s obviously controversial but so is everything that puts white privilege into disrepute.”

A Black Lives Matter supporter suggested: “If you’re eight years old, watching a football match and you see your idol kneel with his teammates against a cause, you’re going to feel strongly about that cause.”

One of the Bees’ London neighbours, Millwall, were involved when kneeling at matches first came under serious scrutiny in the UK.

The ensuing row extended to involve politicians when fans booed as players took the knee during a match at the club’s stadium in December.

Another Championship club in the capital, QPR, dropped the gesture in September. “Taking the knee was very powerful but we feel that impact has now been diluted,” said Les Ferdinand, the club’s director of football and the only black person in his position in the English game, at the time.

The former England striker added: “No-one is more passionate than me about this topic. I have spoken on the matter throughout my footballing life.

“The taking of the knee has reached a point of ‘good PR’ but little more than that. The message has been lost. It is now not dissimilar to a fancy hashtag or a nice pin badge.

“What are our plans with this? Will people be happy for players to take the knee for the next 10 years but see no actual progress made? Taking the knee will not bring about change in the game – actions will.”