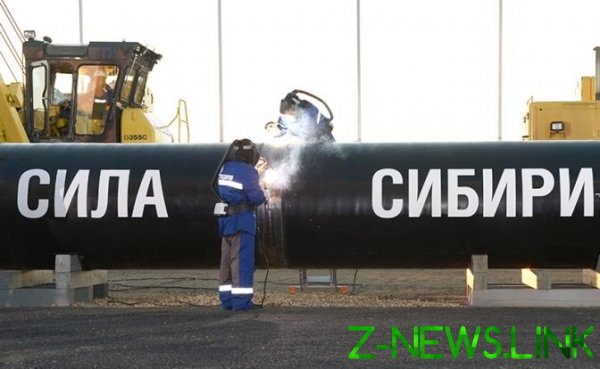 “Gazprom” has started to design and survey works on “the Power of Siberia-2” — pipeline to China through the territory of Mongolia. We will remind, on March 27, Vladimir Putin instructed the head of Gazprom Alexei Miller to perform this routing. Research includes development of feasibility studies, conducting design and survey work and the formation of the resource base. All these works, “Gazprom” plans to finish this year.

Recall the “Power of Siberia-2” is a transit pipeline through Mongolia with a capacity of up to 50 billion cubic meters per year. According to Miller, it will also connect the transmission infrastructure of the West and East of Russia, and gasifies Eastern Siberia, which now has no access to the main pipe.

It is assumed that the resource base of the project will be the deposits of Yamal and Nadym-PUR-Taz region of Yamal-Nenets Autonomous district and Krasnoyarsk Krai, as well as Kovykta field. “The Yamal gas will be supplied to Europe and Asia,” said Alexey Miller. In practice, this means that “Gazprom” will supply gas to the regional market, where the price is higher.

Note, from the beginning, “Gazprom” expects to lay a gas pipeline through the Altai Republic — in the area where Russia borders China. In addition to the lack of a transit site, this version was shorter in length. However, in this case to lay the pipe had to be through impassable mountain ranges, and throughput of the pipeline would be less than 30 billion cubic meters per year.

In September 2019, the Putin instructed Miller to “think about the Mongolian route”.

In fact, the concern on all pairs included in the new mega-project. According to analysts, the cost can reach 1.5−1.6 trillion. rubles, and the construction will take four to six years.

How justified such investments, what will be the payback period of the “Power of Siberia-2” — remains an open question. On the one hand, the policy of Chinese authorities to substitute natural gas for coal in urban areas has led to extremely ambitious growth rate of gas imports: 21% in 2016 to 27% in 2017 and 32% in 2018 (to approximately 117.5 billion cubic meters). With the other game of “Gazprom” could complicate the United States.

In early may the research service of the United States Congress prepared for the legislative report on the operation of the gas pipeline “Power of Siberia”. It indicates that Russian-Chinese cooperation necessary for the functioning of the pipeline, “doesn’t Bode well as the United States as a whole, and their relations with each country”. The authors point out that further cooperation of Russia and China in the energy sector may lead to the loss of us exports of liquefied natural gas (LNG).

“Although the pipeline “Power of Siberia” does not cause the United States great concern, broader agreement between Russia and China could be the beginning of new market trends and the future promise of the U.S. losses in the sphere of LNG exports,” believe in research service.

American experts remind that by the year 2025, when the pipeline is operating at full capacity, “Power of Siberia” will deliver to China 38 billion cubic meters of gas per year. This will make up 13% of the total Chinese demand in 2018. Thus, in five years, Beijing will be the second largest purchaser of Russian gas after Germany.

The report stresses that, according to some experts, the pipeline was supposed to be a signal to Washington.

What is the fate of “the Power of Siberia-2” will benefit from the new pipeline Russia?

— The state Corporation love global projects: they are larger and longer the better, — said the President of the Union of entrepreneurs and tenants of Russia Andrei Bunich. You just need to approve the project and then you long to spend the money. Moreover, the output is unknown who will finish “the Power of Siberia-2”. Time goes by — you see, those who are now the construction begins, you will not have to report why they started all this.

In the case of “Gazprom” a good account of past experience. Miller still two decades manages the Corporation, and repeatedly, such projects were implemented. If they perform, it turns out: these projects often did not take into account technological trends and geopolitical risks, that was a very questionable trade and investment policies of the company. As a result, “Gazprom” carried huge financial costs, and got into huge debts.

Considering these points, many of the projects of “Gazprom” raises questions. And most of the questions, of course, is the “Nord stream-2”, the cost of which is estimated at nearly 10 billion euros.

15 may it became known that the Federal network Agency of Germany has refused to release the “Nord stream-2” from the rules of the EU Gas Directive. The Directive in particular requires coming to the EU offshore pipelines to meet the requirements of division activities for the supply and transportation of gas and access by third parties. For the operator of project Nord Stream AG 2 this means that the pipeline can be downloaded only half.

Notice of such an outcome, analysts warned many times. In the case of China and the “Power of Siberia-2” can be a similar situation.

But I’m just more confused — why do we always have to pay for the construction of these pipelines? Why does the Russian unilateral needs to lay them?!

— It is bad that this was done without consideration of technological changes in the world. Today it is clear that LNG will develop much broader, ultimately, the entire global gas market may shift to LNG. Causes the liquefied gas is easily traded on the stock exchange, there is easy to bring financial instruments. Therefore, the LNG market is likely to come to exactly the same system as the current oil market.

But “Gazprom” it is hard not to notice. The concern, let me remind persistently denied once that LNG generally has a right to exist. And even now, when the opposite is obviously the topic of liquefied natural gas in Russia develops NOVATEK, not Gazprom.

In fact, Gazprom is behaving like stubborn, backward company, which is a parasite that does not give others access to the export pipeline. For oil, I note, in Russia there is no such situation.

Revealing another aspect. In Russia a lot of gas, for its production there are no restrictions, as in the oil — mine all you want. And we have the industry within the country that needs gas. But something is not audible to Gazprom has taken the initiative and used its resources to help other sectors.

If someone in Russia wants to conduct themselves the gas it needs to pay, and very expensive.

Plus you have to consider the situation in the world. In mid-March, when there was a crisis of oil, suddenly it became clear that China could refuse to buy our oil for their own reasons.

But for Russia it was a critical moment. Just, China’s agreement in any circumstances, to buy Russian oil could help us much but such consent is not forthcoming.

Beijing has its own interests in negotiations with the United States, and it is necessary to take into account. Released in January by the Ministry of Finance of the PRC the agreement means that China in the first part of the trade deals with the US should increase purchases of American goods in the next two years by $ 200 billion. The Chinese do not really want. Plus, now the US accuses China in the spread of coronavirus.

This strategic line of confrontation between Beijing and Washington for a very long time, in fact it is the cold war. And it is clear that the parties will bargain — every year there will be some negotiations. So, definitely Russia in this auction will be a bargaining chip.

Notice, just one of the points of the trade agreement, China-US — it is the obligation of the Chinese side to buy American LNG. Moreover, the conditions for China are quite profitable: he will actually be allowed to invest in gas production in Alaska, so we cannot say that the Americans imposed onerous conditions.

“SP”: — Gazprom is trying to break into this game?

We just pull his pipe at his own expense. It is clear that the Chinese will give us the “Power of Siberia-2” build. And then, possibly, the situation will develop according to the scenario of Germany: the new pipeline will become redundant, which can be used at the event. And whose presence does not interfere to negotiate with the United States.

Not the fact that China will take on commitments to buy the gas supplied by the “Power of Siberia-2”. So, we again risk being in a dependent role.

I don’t know why the Kremlin is. A gas pipeline to China — commercial project, and when deciding on its construction should be considered and the risks and comparative effectiveness of the project, especially with the development of the LNG market, and turning it into the future in the financial market.

On such independent analysis in Russia, no one does all at the mercy of “Gazprom”. In the end, we get another unsafe megaproject, which may simply deaden the invested funds.