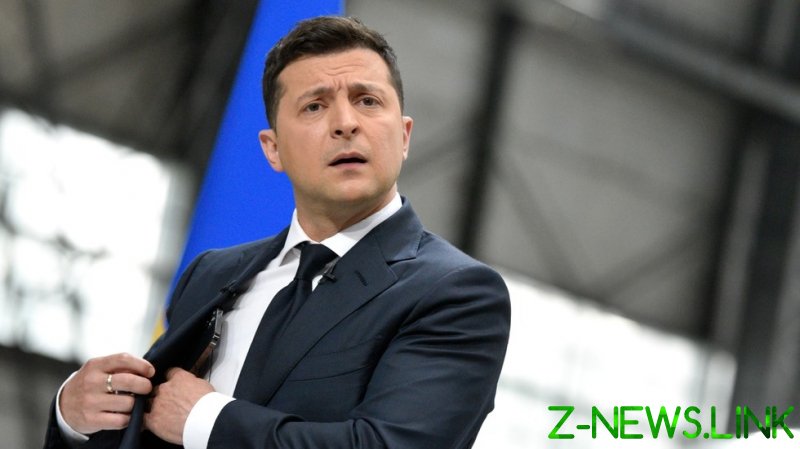 Poroshenko was particularly outraged by Zelensky’s message of solidarity to the people of Belarus, who are facing a harsh crackdown on political opposition and a widespread campaign of arrests. According to Poroshenko, Zelensky is moving towards the same sort of authoritarianism as Belarusian leader Alexander Lukashenko.

This is something of an exaggeration, however. Zelensky has done nothing that would be genuinely comparable in scale or viciousness to the violent record of repression that Lukashenko has built for himself, especially after the Belarusian elections of August 2020. Most likely having committed electoral fraud, the dictator in Minsk then topped it off with a fierce, ongoing, assault on anyone who dared challenge him, which has affected tens of thousands of Belarusians in one way or the other. And it may well have inspired terror in far more people than that.

It is not hard to guess why Poroshenko, a rich oligarch and an ambitious politician as well, would reach for such an extreme comparison. He was the first post-2014 Ukrainian president (not counting a largely forgotten interim stand-in of short duration). The ‘Chocolate King’ started out with substantial popularity in much of Ukraine, though certainly not in the eastern separatist territories that his troops had tried and failed to subdue by force. His credit with Ukraine’s new Western supporters and sponsors was higher. With massive Western backing, he was supposed to lead the country’s reform breakthrough at long last. Yet, as some realistic observers who resisted the neo-Cold War Kool-Aid predicted, he mostly failed.

And, in 2019, Zelensky, a former comedian and media businessman with no political experience, program, or profile but at that time backed by a competing oligarch, Igor Kolomoisky, swooped in out of nowhere to demolish Poroshenko with a shattering electoral defeat. Zelensky, a younger man to boot, is the face of Poroshenko’s worst, most humiliating failure.

Notwithstanding this setback, Poroshenko, who can look back on a long, checkered career in Ukraine’s volatile politics, did not quit but continued to lead what is really his personal party, under the name European Solidarity, which has 27 out of the de facto 421 seats in Ukraine’s parliament. Despite this small number, a recent poll of election intentions shows Poroshenko, with almost 15%, in second place after Zelensky, with nearly 20%, while other candidates are not remotely close.

Given that Ukraine’s presidential elections can feature a second round, this is good news for Poroshenko. He has a potential comeback to fight for, especially since the same poll shows a similar pattern for parliamentary elections. Zelensky, on the other hand, while still commanding a theoretical majority, is far from the populist steamroller he was in 2019.

Yet it would be wrong to quickly dismiss the former president’s ill-tempered sally as settling old scores or fishing for advantages in current and future political battles. Because, despite all the exaggeration, there is an important element of truth in Poroshenko’s complaint.

While not meeting Lukashenko’s very low standards, Zelensky has been displaying clear and growing signs of incipient authoritarianism. He has censored opposition-affiliated and critical media, and used legal proceedings to go after political opponents. Among Ukraine’s backers in the West, this behavior has either not been noticed (very unlikely) or gently overlooked. Indeed, some Western commentators, such as Cold War re-enactor Michael McFaul, have predictably praised and emboldened Zelensky’s walk on the dark side.

Yet the evidence is clear: last year, even Poroshenko, once the darling of the West, was charged with abusing his former office as president. In an embarrassing move, criminal proceedings against him were dropped on the eve of Zelensky’s visit to Washington. Clearly, someone must have recalled that the Americans really liked the first president of post-2014 Ukraine.

Make no mistake: It is not impossible that the victims of these prosecutions have actually committed some crimes, although by no means necessarily the ones they are charged with, and the detail of the charges has been kept under wraps. It may be counterintuitive, but the real problem here is not the guilt, innocence, or in-between record of the accused. For one thing, as in many other political systems, no major Ukrainian politician is likely to have clean hands. The real problem is that you would have to be naïve or biased (or both – see McFaul) to believe these prosecutions are about guilt or innocence in the first place. Instead, they are related to political power. They are, as Poroshenko noted in his own case, about “the persecution of the opposition.”

Regarding the media, the most recent case is perhaps also the most egregious. Using the National Security Council and an opaque procedure that seems to have come from a beginner’s manual on how to undermine the rule of law, Zelensky has tried to shut down the Russian-language news website Strana, while also going personally after its chief editor, Igor Guzhva.

Fortunately, this attempt has been largely unsuccessful: Strana is still accessible, at a mirror site, and Guzhva is suing. But the intentions are crystal clear: to suppress critical journalism under the cover of “national security.” What is also clear is that Zelensky does not even have the letter of the law on his side. By formal criteria alone, his use of the National Security Council to impose censorship is strictly illegal. Because, in so far as Ukrainian law allows the shuttering of any media, it’s only through the courts. But Zelensky may have realized that it would have been a little harder to have his way there, insofar as there is no discernible legal basis for a shutdown in the case of Strana.

So, Ukraine’s former president has a point, after all, when accusing the country’s current leader of authoritarianism. But there’s another layer, a bitter irony here, because Poroshenko certainly knows what he is talking about: he himself has a record of undemocratic actions. Even the organization Freedom House, an NGO largely funded by the American government and very well disposed toward Ukraine’s post-2014 rulers, acknowledged as much in 2019. Back then, it publicly warned Poroshenko that the actions of his government were becoming “increasingly extreme.”

At that point, the broadcasting of news, films, and other shows in Russian had long been banned in the country, beginning in 2014. But the Ukrainian authorities kept adding restrictions on any media and content that, they claimed, somehow favored Moscow’s interests, including attempts to censor two domestic TV channels. Between the summer of 2017 and 2018, 200 internet websites were also blocked, in – to quote Freedom House again – “accordance with a vaguely worded national security mandate.” Embarrassingly, Ukraine even failed to participate in the Eurovision Song Contest of 2019 because of bizarre suspicions that singer Maruv was not patriotic enough.

Poroshenko’s actions proved quite relentless. By November 2019, he had made his way to declaring martial law, albeit only for 30 days and in 10 regions of the country. Ostensibly in response to what was really a small naval incident in the Black Sea, this operation clearly owed more to domestic electoral politics and Poroshenko’s desire to keep up his image as the war president. Yet he lost. Catastrophically. To Zelensky. The man he now points to as an authoritarian. Is there a lesson here? Yes, even three, and all unlikely to be heeded.

First, the tendency to play with the rules, disrespect the norms, and try out the fit of authoritarianism is structural in Ukraine’s system. It will not quickly disappear. Idealized depictions of Ukraine as a stalwart democracy holding up ‘universal’ values on the frontline of an equally idyllic West, as spread by the enthusiastic historian and Ukraine booster Timothy Snyder, are misguided and misleading.

Second, for Ukraine’s presidents, the lesson would be to finally resist the oh-so-foreseeable temptation to start playing dirty as soon as – or at the latest when – their ratings go down. It’s not only wrong, it also may not even work. Ukrainian presidents are, of course, not alone in having adopted that bad habit, but Ukraine, especially, with its unfinished democracy, has much to lose.

Third, for would-be friends of Ukraine in the West, it would be nice if they stopped turning a blind eye. Yes, Ukraine is in a de facto conflict with Russia, given Moscow backs the separatists in the east of the country. And Russia rage is fashionable. Nonetheless, you are not doing Ukraine, and especially ordinary Ukrainians, any favors by letting its leaders get away with eroding its democracy and rule of law.

And precisely because Ukraine now depends on the West as never before, the West would have leverage to help defend Ukraine’s fragile democracy against threats from its own elite – if, that is, it only chose to use its power for this purpose.