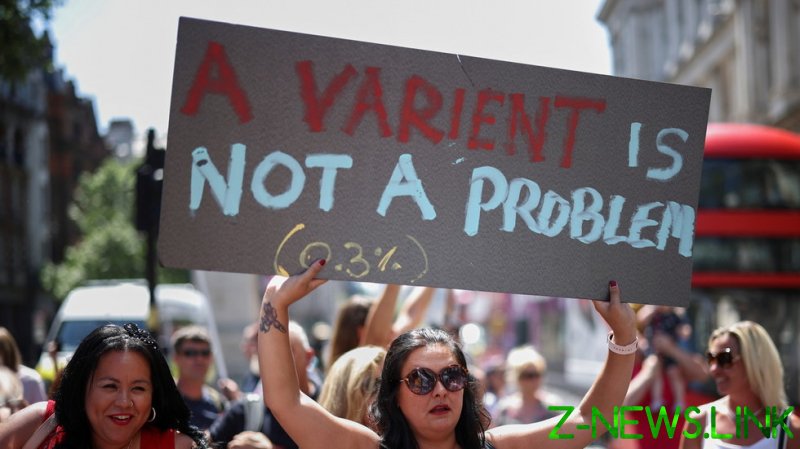 The government has been busy briefing friendly journalists that the proposed lifting of restrictions will be delayed for a further month. The government claim that they are concerned about the increase in cases of the Indian – or Delta – variant, which is on the rise across the country. Yesterday, it was announced that 7,490 new cases of Covid had been detected. This is a leap from 5,341 the previous week. Scientists, who always urge caution, claim that the rise is due to the fact that the new variant is 60% more transmissible. Professor Sir David King, the former chief scientific adviser to the government, claims, for example, that the data shows ‘evidence of another wave appearing’ in the U.K.

Interestingly, however, there does not seem to be any great upsurge in hospitalisations. The latest data shows that there have been, on average, only 187 people admitted to hospital per day with Covid, and only eight deaths were recorded yesterday. These figures alone make any justification for delaying the lifting of the restriction look rather shaky. It would, I suggest, be a mistake for the government to base delaying the lifting of restrictions on Covid cases alone, as hospitalisations and deaths, which are not high, must also be taken into account.

Hospitalisations and deaths remain low because the vaccine rollout has been so successful. Indeed, more than 41 million Brits have received their first vaccine, which accounts for 79% of the total adult population. Also, more than 28 million have had their second vaccine, accounting for 57%. Moreover, every adult in Wales will from today be offered a vaccine. The most vulnerable people in our society are therefore protected and the scientific case for not reopening on 21 June is therefore questionable at best. As Mark Harper, the chair of the Covid Recovery Group, stated, ‘the effectiveness of our vaccines at preventing hospitalisation means unlocking on 21 June could proceed safely. Any decision to delay will be a political choice.’

There is also the question of the economy, and particularly the leisure and hospitality industry. Hospitality industry experts warned back in February that delaying the reopening until 21 June has already cost £9 billion and put 99,000 jobs at risk; this is on top of the 600,000 jobs that have already been lost in the hospitality industry due to the coronavirus lockdowns. Delaying the lifting of restrictions beyond 21 June will be particularly painful for pubs, as statistics reveal that only 24% of them remain confident that they will be in business by the end of the year. Moreover, Freedom Day comes in the middle of the European Football Championships, with many Brits looking forward to watching the national game with a pint in hand. As a result of this pending decision to delay, many will no doubt be forced out of business, and we will see even more boarded-up pubs in our towns and cities.

It is not only pubs that are under threat, but nightclubs also. Many nightclubs, which have been closed since March 2020, have diligently been preparing for the grand reopening on 21 June. In fact, for a good number, their survival depends on it. Indeed, the Night Time Industries Association said its businesses had spent millions of pounds preparing to reopen and a delay would be ‘catastrophic’ for the industry. If the government go ahead and delay the lifting of restrictions, they will have to come up with a financial package to compensate nightclubs, which are already on the brink of going under.

There is also the fact that the 50,000 weddings that have been planned in the four weeks after 21 June will have to be cancelled. The UK Weddings Taskforce estimates that this will result in the industry losing £325 million for every week of delay. They too will have to be compensated from the central coffers.

To delay ‘Freedom Day’ for another month will come as a massive disappointment to the public. People are quite rightly fed up with the restrictions and are eager to return to normality. Tonight, however, all our fears will be realised, and the prime minister will make the case for a delay of one month. Bruised by the failure to lock down early enough last March, and probably affected by his own near-death experience with Covid, the Prime Minister has been convinced to err on the side of caution.

This is a mistake. The scientific argument for delay is dubious, and there is also a strong economic argument for the counter. So come on Boris, be bold rather than meek, give us back our freedom and let our lives return to normal because we have suffered long enough.