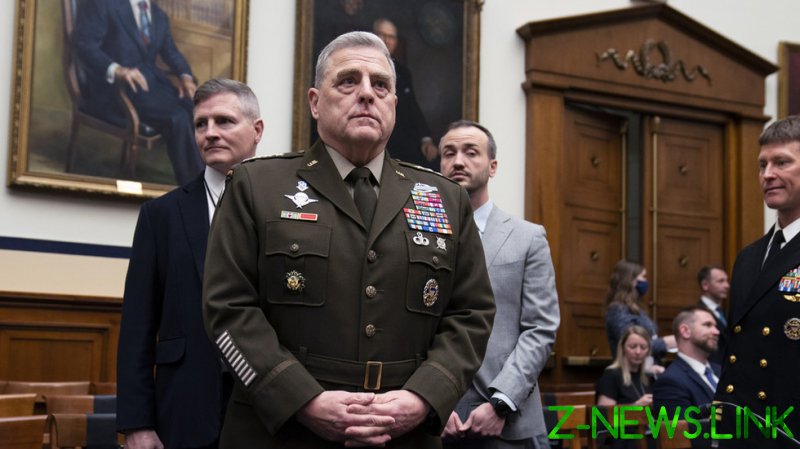 As the world is becoming more unstable, the “potential for significant international conflict is increasing, not decreasing”, the top US military officer told lawmakers on Tuesday.

Defense Secretary Lloyd Austin and General US chairman of the Joint Chiefs of Staff Mark Milley defended the record-setting $773 billion budget the US Department of Defense is requesting for the fiscal year 2023 at a grueling House Armed Services Committee hearing. The hearing saw innumerable mentions of US adversaries Russia and China, both of whom are perceived as a threat to US global power in Washington.

Milley dubbed Russia’s attack on Ukraine “the greatest threat to peace and security of Europe and perhaps the world” in his 42 years serving in the US military. However, it was “heartening” to see the world rally around Ukraine, he added.

We are now facing two global powers: China and Russia, each with significant military capabilities both who intend to fundamentally change the rules based current global order. We are entering a world that is becoming more unstable and the potential for significant international conflict is increasing, not decreasing.

Both military officials later pointed to billions allocated to space and cybersecurity as examples of US preparedness. They acknowledged that Washington has no defense against the hypersonic missiles that both Russia and China have successfully tested, but reassured the committee that the development of the “glide-phase interceptor,” a cutting-edge missile defense capable of countering hypersonic missiles, is  proceeding apace.

Milley argued that only the presence of US “hard power,” in open with Russian forces, might have prevented Russia’s military operation in Ukraine: “With respect to the Russian invasion of Ukraine, it’s been a longstanding objective of Putin. And to speak candidly in the short of the commitment of US forces into Ukraine proper, I’m not sure that he was deterrable. [This] would have required the use of US military forces and would have risked armed conflict with Russia, which I wouldn’t advise”.

“I believe a lot of our European allies, especially those such as in the Baltics or Poland or Romania or elsewhere, they are very, very willing to establish permanent bases,” Milley said.

They’ll build them, they’ll pay for them, etc., for us to cycle through on a rotational basis. So you get the effect of permanent presence of forces, but the actual individual soldiers, sailors, airmen or Marines are not permanently stationed there for 2-3 years.

Austin said that NATO was still discussing how it should bolster its permanent presence in eastern Europe. “If NATO deems that it’s appropriate to change its footprint, then certainly we’ll be a part of that,” Austin said.

When asked whether, if US “hard power” alone could deter President Putin from launching Russia’s military operation in Ukraine, would more US forces in Taiwan “increase or decrease” the likelihood of Chinese President Xi Jinping launching an attack on the island, Secretary Austin demurred, instead repeating that the strategic questions surrounding Ukraine are different from those surrounding Taiwan and cannot be neatly transposed from one country to the other.

Austin admitted that the US “needs to do a lot better” in “leveraging US allies” in space and cyberspace, and not merely in the domains of land, sea and air.