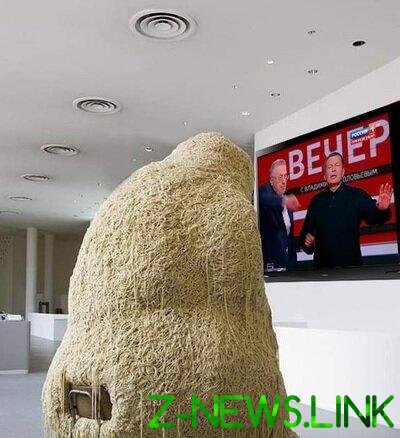 Hello dear members and visitors of the channel! Today we will talk about the phenomenon of “leavened” patriotism and make a portrait of a typical Jingo, using five signs, which clearly describes this character.

What is this “leaven”, or jingoism? Wikipedia gives the definition:

Jingoistic patriotism (lapotnaya patriotism, jingoism) – ironic expression in the Russian language, indicating the unqualified praise of all Patriotic. Opposed to genuine patriotism, permitting the recognition and rejection of the negative features of the state, as well as fight with them.

Please pay attention to the last letter “I” in the quote that says that you need to fight with the negative traits of the state and not to himself. This is important.

In General, jingoistic “patriot” blindly believes the state and extols all domestic, turning a blind eye or openly ignoring the doubtful and bad that has or is happening in their own country.

So, here’s five of the promised features-the setting of a real jingoistic patriot:

1. To confuse greatness with size

This thing is a “pain” many of our countrymen who are still experiencing phantom pain at the collapse of the USSR. It is amazing that many people still believe that the larger the area, the stronger and more powerful than their own country! As the eighteenth century, not the twenty-first. How people live on this earth, that they occur – that is another question, the main thing – the Greatness that is measured by the value. In our country even have a tradition: money, create something huge and pompous, but about the quality and practicality of think about it later. Examples are the Moscow metro times of comrade Stalin and the Sochi Olympics. Although in the first case, the quality is still thought seriously.

2. To confuse the unity of the spirit with the collective stench

There are times when people take a collective stink for the unity of the spirit.

A sad example in our history that characterizes this assertion. The so-called Soviet “patriots” vehemently denied mass repressions of 1937-1938 and revere their “inventor” of comrade Stalin, parallel oplevyvaya of the late Solzhenitsyn. It’s very convenient to revere the “great leader” when you’re not you’re not your relatives, “the country rose” with a pickaxe in the vast expanses of the USSR, spitting his teeth and the camp dust. Although respected in the environment of Jingo Mr. President Putin, and in the past sponsored the FSB, does not deny the fact of the triumph of death and suffering in the thirties of the last century, BUT quite uporotyh “Kvasnikov” even that do not want to hear. The collective stench and the political hysteria of the thirties is the result of fear of the animal, the person dictating loudly to kill “enemies” in order not to find yourself behind barbed wire or in a pit with nine grams of lead in the back of his head. My family, unfortunately, did not escape the steamroller of repression, so I have a strong aversion to such “friends” who deliberately deny and whitewash the crimes of those dashing years in our history. This must never forget that the ad is not repeated.

3. Aggressive attitude to any criticism

So, any kind. For example, tell me about palm oil in the “Russian cheese”, and the answer is “you hate everything Russian, because you are a Russophobe.” If you doubt in the artificial inflation of the budget for the Olympics in subtropical Sochi, then get ready to hear the hackneyed “don’t deprive people of celebration!” But criticism of our great “obsoletes of the Constitution” is generally perceived jingoistic patriots as a personal insult, demanding, not afraid of the words, retribution! By the way, dirty “patriots”words like “liberast” or “Russophobe” in recent years acquired a meaning as “having their own and independent opinion of the man.” 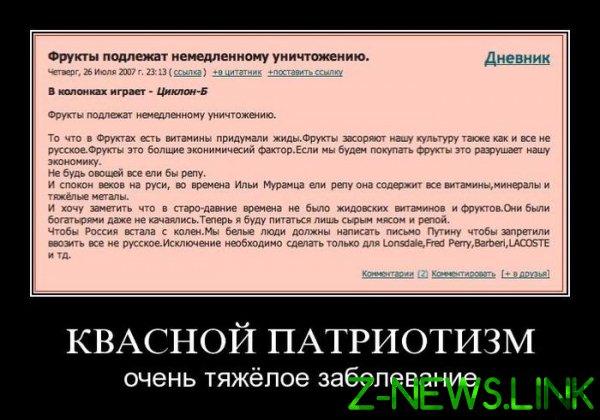 4. Definitely believe everything about broadcasting TV

Yeah, Ukrainians are already quite oborzeli, cursed the United States and “Europa” are dreaming as we are, independent, to enslave and to grab our oil and gas, but sisterly Syria is necessary to help! Sisterly Syria. What are we brothers? Who cares if the TV said that we are brothers, then brothers! Watching TV programmes there is a consistent feeling that the problems in Russia already almost there, but how many of them out of our country! Especially Ukraine, that it concentrated all of our pain and suffering, why else would she give so MUCH airtime?? Why are many of our compatriots are so blindly believe the idiot box? There are probably several reasons:

For Jingo, carefully listening to the program “Nightingale droppings”, to turn off the TV – it’s like waking up in the Matrix.

5. Endlessly to invent new and new enemies, but will protect only the noodles on their ears

This paragraph aims to describe the phenomenon of “couch troops”. In recent years, the number of “enemies of Russia” (for reasons Jingo) is only growing, and in General they interfere with the lives of working people! Once in the course were the expression “enemy of the people”, which in “the dark years” of the Soviet Union had to the court, but now these “enemies” had accumulated a whole menagerie:

And here, our divan infantry ready to break and destroy, especially after taking on breast cheap “fire water”. However, in the real world these figures anywhere on their drab street will not run, but their noodles on the ears, they will defend to the… hoarse! Why? 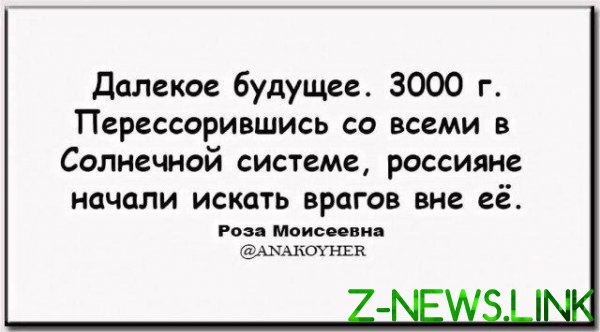 Explanation instead of a conclusion

It seems, in ordinary psychology. Clever man, strong and active he directs his life and all the mistakes and failures attributes to himself, fully incurring responsibility for them. Man is weak, “victim of circumstances”, constantly blame the other “bad” people, the state, the weather… in Short, all are guilty, but not he.

And our jingoistic patriots. All the troubles of the country, blame invented enemies and anyone, but not themselves with the leadership of the state. They really like to scream: get out of the country! Suitcase-station-Europe! Without you, the air will be cleaner!

Will not. Without thinking and reflexing people, real patriots of their country who are not looking for blame, and do think that the country needs, homeland just bent. The finger-pointing and shouting slogans will not save. Only reasonable action without regard to the “culprits” will lead our country to prosperity.