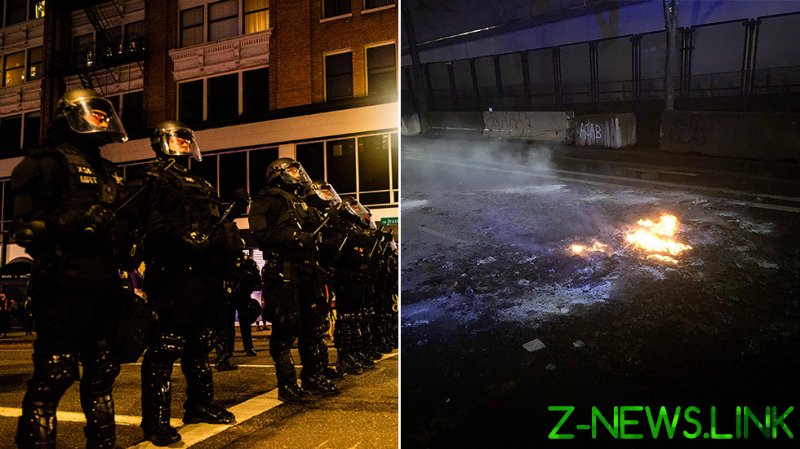 An activist group in the city announced that they intended to demonstrate on Thursday night “in solidarity” with the Black Lives Matter movement, but it appears that things quickly got out of hand.

After assembling in downtown Portland around 9pm, the protesters marched through the streets, stopping to break the window of a Starbucks coffee shop. They also vandalized several other buildings, including a police station, local media reported.

The mob then turned its attention to the Mark O. Hatfield Federal Courthouse, previously the target of weeks-long nightly protests which often descended into violence. Videos posted to social media show fireworks being launched near the federal building.

Multiple fires were lit in the downtown area, according to reports.

Eventually, the PPB declared a riot, claiming that protesters had “thrown multiple firebombs at officers and launched commercial grade fireworks at the Federal Courthouse and Justice Center.”

Footage appears to show fireworks going off as officers in riot gear advance on a group of demonstrators. Some eyewitnesses said that they believed that the police fired pepper balls or some other kind of non-lethal munition into the crowd as they dispersed the rioters.

The PPB later issued an update saying that the mob had fragmented into several smaller groups and that there was still “burned debris” in the street.

The unrest comes just a day after dozens of protesters vandalized nearly a dozen businesses and public buildings, including Portland City Hall, the Oregon Historical Society, and the PPB headquarters.

Earlier this year, Portland became a near-warzone between protesters and federal officers tasked with protecting the federal courthouse. The nightly street skirmishes, sparked by BLM demonstrations held in the wake of the death of George Floyd at the hands of the Minneapolis Police in May, made national headlines and even caught the attention of President Donald Trump, who accused Portland authorities of abandoning their city to “anarchists.”