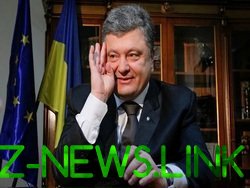 The President of Ukraine Petro Poroshenko slammed the man a balloon on the head after he asked the President a question about the persecution of journalist Anatoly Sharia. On 12 March, according to the Shary on your website.

During the passage to the voters at the meeting Poroshenko several times asked this question, but the answer have not received. And when one of them came to the head of state closely, he lightly hit him on the head a white ball.

Earlier, Poroshenko met with voters have demonstrated inadequate to his post and position behavior.

While in Zaporozhye, it is the question were there girls over the persecution of the same Sharia pulled her knitted cap. Later, the Ukrainian President, passing through the crowd, grabbed the man by the nose.

Before the questions of the citizens of Cherkasy on when he will fight corruption, Poroshenko called the man “moskalsky provocateur” and advised me to go to Church.

According to psychiatrist Diana Genueskoy, response, Poroshenko says that he feels vulnerable and insecure.

The Ukrainian President understands that his words mean nothing and that his verbal authority, when you can act and convince words, not enough.