Poroshenko called for the introduction of liability for denial of Holodomor 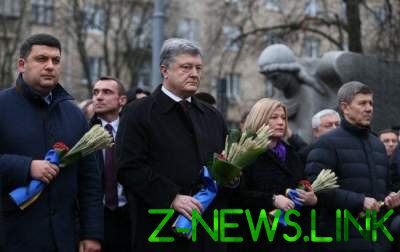 The President wants to pass legislation on the Holocaust and the Holodomor.

Ukraine’s time to introduce responsibility for the adoption of the law on liability for denial of the Holodomor and the Holocaust. On Saturday, November 25, said the President Petro Poroshenko in Kiev during the events of remembrance of the victims of Holodomor in Ukraine, the press service of the head of state.

Poroshenko stressed that the descendants must know that it was not just an artificial famine, but a carefully planned famine. “Moreover, the genocide, by all indications, which are defined in the UN Convention of 9 December 48th year. To on every continent realized that not to recognize the Holodomor is just as immoral as to deny the Holocaust,” added the head of state.

See also:  On the domestic economic situation in Russia

He recalled that 14 countries at the level of parliaments recognized Holodomor genocide and the Ukrainian diplomats continue to bring the truth to the peoples all over the world.

“In March this year the Assembly of Portugal has defined the Holodomor as genocide. In early November the U.S. Congress… also presented a draft resolution. We thank our American friends and partner and expect a successful vote on Capitol hill,” said the President.

As reported Корреспондент.net 25 November in Ukraine commemorating the victims of Holodomor – million Ukrainians destroyed by the totalitarian Communist regime.

National Day of remembrance of the victims of Holodomor will be held throughout Ukraine and in 32 countries.