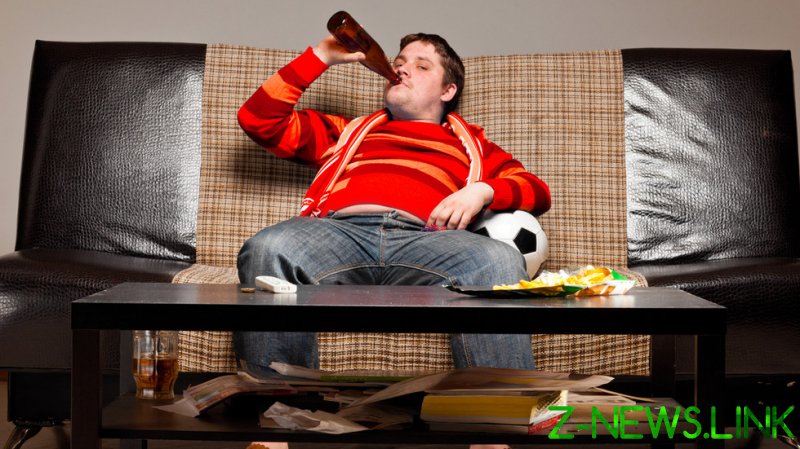 Lockdowns have been great for speeding up the evolution of the human species.

We were well on our way to becoming total slobs anyway, but that little b*stardof a bug seems to have given some of the worst elements in human nature a dangerous boost.

We haven’t just been sitting on our sofas, oh no, we’ve been doing our best to make sure any passing aliens on a flying saucer would take a quick look around and say “Nah, let’s not pop down there and say ‘greetings, earthlings’ – those humans are hideous creatures, look at them! Even their dogs are fat! See ya, wouldn’t wanna be ya!”

So, to get you motivated to get off your sofa and out of doors and back walking through the hills or along the beach in the fresh air, here’s a sample of how our species has been evolving this last 18 months or so. Enjoy!

The return of the smoker:

Nobody in the modern era can claim that they don’t know about the health dangers of smoking. It’s not like in the 1930s when there were certain types of cigarettes that a doctor recommended – that dodgy cough was nothing to do with tobacco they’d say, oh no, it was caused by dust or germs.

Over half a million British youngsters took up the habit during lockdown to beat the stress and boredom of doing nothing much of anything at all. A study found that over 650,000 Brits aged between 18 and 34 started smoking, that’s a rise of 25%.

Those stark health warnings on packets, telling smokers precisely how burning one of those little paper tubes at your lips can kill or cause any number of horrible illnesses do nothing. They just seem to make young adults feel ‘well hard’ as they tear open the pack with their yellowing teeth. Covid-19 doesn’t tend to tear at the lungs of the young, I guess they were feeling left out.

Ah, but what’s better than an alcoholic beverage in your hand as you work your lungs through a pack of unfiltered Camels? Back in the good old days, they were the yin and yang of any session in a pub, with maybe some salted peanuts or pork scratchings chucked in.

The same boffins from University College London (UCL) who found that smoking was on the rise also, of course – drinking and ciggies have always travelled in either hand – found that guzzling alcohol had also gone up.

“Lockdown was a period of great stress for many people and we saw rates of smoking and problem drinking increase among groups hardest hit by the pandemic,” explained Dr. Sarah Jackson from UCL. “People mistakenly believe smoking relieves stress, so some may have used tobacco or alcohol as a means of coping with increased stress or boredom.”

Last summer, Royal College of Psychiatrists stats revealed that the number of people putting their health at risk with alcohol during the first lockdown had doubled from pre-lockdown levels – from 4.2 million to 8.4 million.

It wasn’t just the young reaching for the bottle a little too much, however. Almost 2 million over 50s told mental health charity With You that lockdown restrictions had led them to start drinking earlier in the day. A Centre for Ageing Better study also found 32% of people aged between 50 and 70 were drinking more during the pandemic.

A study in July by Drinkaware, a charity that warns about the dangers of alcohol misuse, found that about two out of every five (38%) of furloughed workers drank more during lockdown and an earlier study found that one in four of those working from home were also reaching for an extra glass or two. A third of parents with a kid under 18 in the house were drinking more too.

A certain brand of lager, that I won’t dare to name here (because it can’t possibly be true), was jokingly nicknamed ‘wife beater’ down my way because of the perceived level of aggression it generated in some already idiotic inebriated men.

Same as beer and cigarettes, alcohol and domestic violence are also common bedfellows, unfortunately. And men and women have been cooped up in doors, some of them drinking heavily – that was sure to be a recipe for disaster amongst some people, especially the bitter and twisted and those who ‘can’t handle their drink’.

Over 160 people – mostly women – died as a result of domestic violence in the 12 months to the end of March, around three a week. Fairly standard figures, apparently. A further 38 people with a history of domestic abuse killed themselves.

However, the report by the National Police Chiefs’ Council added that abusers had ‘weaponised’ the pandemic to control their victims and were using it as an excuse for behaving like even bigger evil scumbags than usual.

The pandemic acted as an “escalator and intensifier of existing abuse” in some instances and some victims were less able to seek help due to restrictions.

Obesity is on the rise:

If folk weren’t going to work and couldn’t go to the gym and were stressed out or bored at home – a lightning dash to the fridge or the biscuit tin was all too likely. This, of course, led to waistlines spreading faster than the Delta variant and it just so happens that being obese also added those people to the biggest at-risk group of not just catching Covid-19 – but dying from it.

And it wasn’t just adults, kids were chubbing out too as they sat around even more than usual playing video games and munching snacks. Especially in the US, where junk food consumption fueled weight gains in one in three children.

Even Fido didn’t escape. A survey of 4500 pet owners by British veterinary help charity the People’s Dispensary for Sick Animals (PDSA) found that our furry friends had also put on weight during lockdown due to too many human treats and not enough exercise.

Scotland, for some reason, was particularly affected by an increase in lardarsed labradors and tubby tabbies. Maybe it was because their owners were making deep fried Mars bars at home?

PDSA Vet Susan Hermit said: “Obesity has been a huge problem among UK pets for a number of years and sadly our report indicates this is only getting worse. With many owners spending more time at home with their pets since the start of the pandemic, the potential for weight gain due to increased feeding – particularly of treats – was always a concern.”

So, all those bored and stressed-out folks sitting alone in their homes with a broadband connection. They’d seen every series on Netflix and HBO or Disney+ and then – somehow – their fingers slipped and, oops, up popped pornographic content.

Last week OnlyFans said it was going to block this hardcore content ostensibly because the banks that moved the money to creators didn’t like it. But then, of course, it didn’t actually happen. Funny that. Who’d have thought morality would take a back seat in the face of a t’interweb tsunami of hard cash?