Poltorak opposed Russian participation in the peacekeeping mission in the Donbass 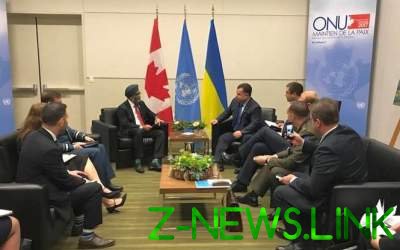 The UN peacekeeping mission must be deployed in all the temporarily occupied territory, said Poltorak.

Ukraine excludes the possibility of participation of Russian representatives in the UN peacekeeping mission in the Donbass, said the Minister of defense Stepan Poltorak during a meeting with canadian counterpart Hargita Sajjana in the framework of the visit to Vancouver.

“We exclude the possibility of Russia’s participation in future Missions. Believe that the Mission in the Donbass possible and with the support of our international friends. Planned will be able to bring to life,” said the Minister.

As the press service of the Ministry, during the meeting discussed the introduction of the UN peacekeeping mission in the Donetsk and Lugansk regions.

Poltorak stressed that the future UN Peacekeeping mission should be deployed in all the temporarily occupied territory.

“The fundamental requirement is to ensure international control of the Russian-Ukrainian border in the conflict zone and the withdrawal from the territory of Ukraine all illegal armed formations and units of the Russian Federation, and establishing the Mission of monitoring the state of storage of heavy weapons,” he said.

“I am pleased that Ukraine has the support of Sweden in the issues related to the plans for involvement of the UN peacekeeping mission in the Donbass. Also I am sure that the decision of the defense Ministry of the Kingdom of Sweden on accession to the operation “Unifier” serve to increase the operational capabilities and achieve interoperability with Euro-Atlantic standards,” – said Poltorak.