Home / WORLD / ‘Political disaster for Biden’: Fauci’s prediction that Covid won’t be beaten until ‘Spring 2022’ met with horror, even at CNN

‘Political disaster for Biden’: Fauci’s prediction that Covid won’t be beaten until ‘Spring 2022’ met with horror, even at CNN 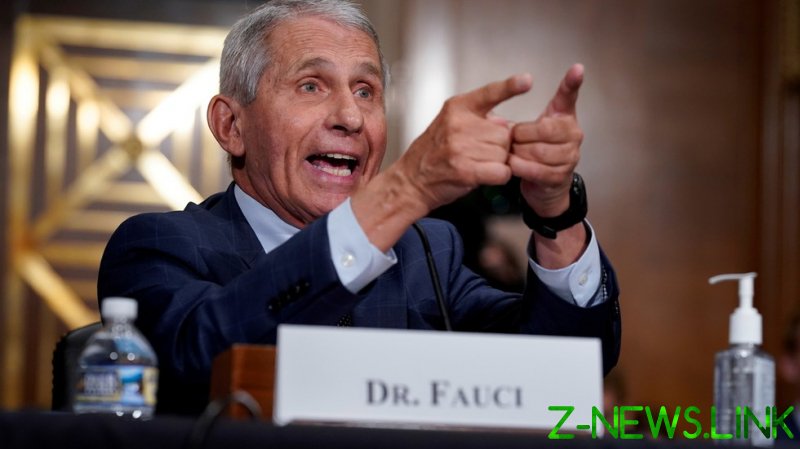 Biden was elected with a mandate to end the pandemic – that much is clear from any media coverage of the election. But as Dr. Fauci informed CNN on Monday, the president’s mission might not be as accomplished as he would like – indeed, the epidemic might drag on until spring 2022, the doctor warned.

But even the prediction of a spring victory, he added, would only be realistic if the 90 million Americans who had thus far avoided getting the vaccine changed their minds, a real possibility, given the FDA’s full approval of the jab on Monday. Individuals who’ve already been infected with and recovered from the coronavirus should also get vaccinated, Fauci continued, though medical guidance for such patients differs on an individual basis.

But the network observed that Biden’s political future, inexorably tied to the pandemic, was poised for potential “disaster” if the virus didn’t hurry up and go away. Certainly his “partial” declaration of victory over Covid-19 on the Fourth of July now looks “highly premature,” it noted, adding some finger-wagging in the direction of relaxations of mask mandates.

CNN lamented that this “nightmare political scenario” would give Republicans an opportunity to paint Biden’s presidency as a resounding failure for a midterm election year.

“It could demoralize the public and trigger the kind of sour mood among the electorate that always spells danger for incumbents,” analyst Stephen Collinson wrote.

The network reminded readers that, even though it was “Americans in more conservative, southern states” who were to blame for the Delta variant taking hold, due to their being “deeply skeptical of government advice and science,” the average voter might not see it that way, especially given the “breakthrough infections” bedeviling vaccinated Americans who contract the virus anyway.

Fauci’s caution that those currently not vaccinated must get the jab if Biden is to have the situation “in control” by next spring, all but guarantees further treatment of the unvaccinated as second-class citizens, a phenomenon that has already become problematic in France – and which is beginning to take shape in cities like New York and San Francisco.

While the media has heavily pushed the narrative that former president Donald Trump was to blame for the sky-high death toll of Americans with Covid-19, the epidemic’s continuation risks shaking the foundations of that claim and revealing that the virus does not, in fact, care who is in charge.

Trump’s reluctance to issue nationwide mask mandates or impose long economic shutdowns were frequently wielded as talking points by the Biden campaign, which claimed that the president cared more about the economy than about American lives.

As of July, Biden’s average approval rating in general had fallen below 50% for the first time in his presidency, and it’s doubtful his inability to perform a medical miracle and suddenly dispel Covid-19 will be helped by his sloppy pullout from Afghanistan, which has brought recriminations from all parts of the political spectrum, when it comes time for midterm elections next year.