‘Political’ BLM & LGBTQ flags should be banned from US embassies, Republican-proposed Stars and Stripes Act says 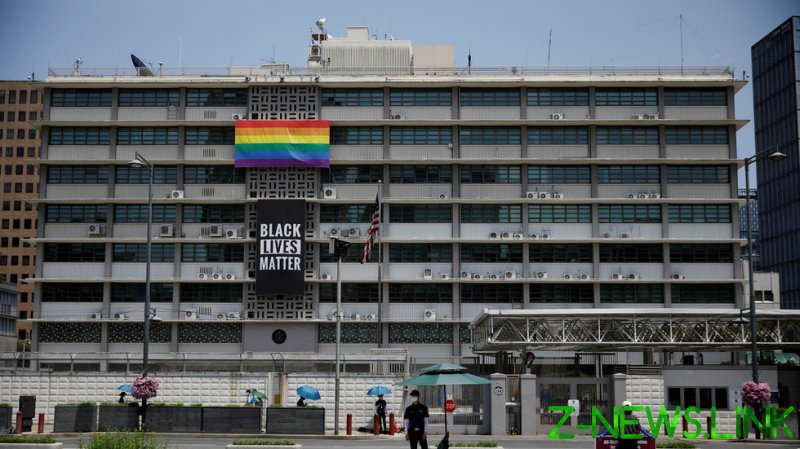 “The American flag is a beacon of freedom and hope for oppressed peoples around the world; it should be the primary flag flown above our embassies and that is what my legislation seeks to accomplish,” Malliotakis said about the bill.

The move comes in response to backlash from conservatives in the US over images of LGBTQ and BLM flags being hung next to the US flag flying at government institutions.

President Joe Biden’s administration recently authorized the LGBTQ Pride flag to be hung on the same poles as the US flag in honor of Pride Month in June. BLM flags began being flown this month in honor of the anniversary of George Floyd’s death while in police custody.

A BLM flag flown at the Athens embassy was so prominent it reportedly covered the United States seal.

Images of the BLM flag have been the primary cause for concern for numerous right-wing pundits. The new bill even specifically calls against the BLM organization being supported as many of its advocates have called for “defunding the police” and “convicting and banning” former President Donald Trump from holding political office again.

“The Administration’s directive is an insult to those who made the ultimate sacrifice for our flag and our nation – especially as we head into Memorial Day weekend – and it is absolutely ridiculous that legislation is needed to correct this issue,” Malliotakis said.

The bill has been co-sponsored by numerous other Republican lawmakers, including Reps. Elise Stefanik (R-New York) and Ken Buck (R-Colorado).

Even with the support of Stefanik, who was recently moved into the position of House GOP conference chair, it is highly unlikely the bill would gain the support it needs in the Democrat-controlled House to actually progress toward becoming law.