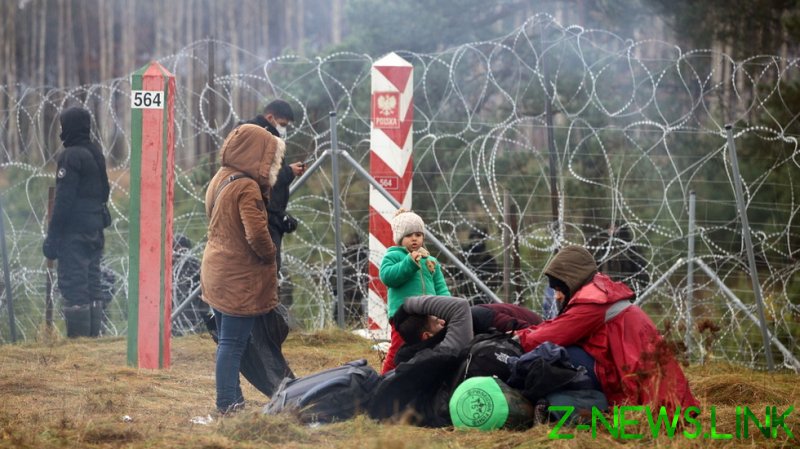 Some 3,000 migrants from the Middle East and North Africa, who are seeking asylum in the EU, tried to cross from Belarus into Poland on Monday. But after being repelled by Polish security forces, they set up a makeshift camp along the border.

“The night wasn’t calm” at the camp as Polish troops used all means at their disposal to make the people leave, according to RT Russian correspondent Konstantin Pridybaylo.

The migrants couldn’t get any sleep because bright spotlights were directed at them from the Polish side and loud messages were played on repeat: “Go home. Return to your motherland. You are not welcome here.”

The camp spans from 500 to 700 meters along the barbed wire separating the Polish territory, and a lot of women and children are among its inhabitants.

The people there told the reporter that they didn’t want to go to Poland at all, with Germany being their ultimate goal.

The situation is already dire at the camp as its inhabitants are lacking food and water.

Crossing into Poland would be a tough task for the migrants due to the large numbers of police and military gathered on the other side. Pridybaylo also noticed a water cannon among the Polish hardware, and said putting it to use would be cruel, as temperatures in the area fell below zero degrees Celsius overnight.

Belarus’ neighbors have been reporting an increase in attempts to breach their borders since June when Belarusian President Alexander Lukashenko announced his country would no longer be holding back migrants seeking to reach the EU through its territory. There were also reports about an increasing number of direct flights to Belarus from the Middle East.

Minsk has said it will only negotiate the situation with Brussels after it lifts all sanctions, including restrictions on airspace, it imposed on Belarus after it grounded an Irish Ryanair flight with opposition blogger Roman Protasevich on board in May.

European Commission President Ursula von der Leyen labeled the events on the Poland-Belarus border a “hybrid attack” orchestrated by Minsk to destabilize Europe and called for more sanctions against Belarus.

German caretaker Interior Minister Horst Seehofer said on Tuesday that Warsaw and Berlin “can’t deal with this on their own,” urging for the migrant crisis to be tackled on the EU level.

Poland said the migrants are being guarded and directed by armed Belarusian servicemen at all times and blamed the troops for violating its border. However, Minsk rejected those accusations as “unfounded and unsubstantiated.”