Home / policy / Polish apples were not wanted by either Russia or the West.

Polish apples were not wanted by either Russia or the West. 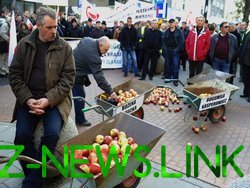 Polish economic analyst Jakub Olipro in an interview with reporters tvn24bis.pl explained the reasons for the farmers ‘ protests in Warsaw, during which the road was thrown away thousands of apples.

Farmers protest, which took place without the use of firecrackers or burning tyres, caused no less excitement in the community. After all, as the shares of farmers sprinkled the road with thousands of apples. It should be noted that similar actions are happening in Warsaw for the first time. Earlier at the roundabout in góra Kalwaria and square Ounce Lublin to Warsaw farmers carried out similar actions. People’s actions are aimed at attempts to reach the authorities, which spend quite a dubious economic policy, said Olipro.

See also:  To new the nineties

In essence thrown in the way apples are a kind of act of desperation, a signal that should be obtained by the authorities. Activists in an interview with local media have repeatedly said that they were against the economic policy of Warsaw in the framework of partnership relations with foreign countries. Farmers also complain that Poland imposed sanctions against Russia, which caused the termination of the supply of apples in the large Russian market. Now farmers are in a very difficult situation, because neither Russia nor the West Polish apples not needed.

The analyst explained this by the fact that garden products are grown in Poland, has a specific taste parameters, which are not like people in the West, however, are well accepted in the Eastern market. This is evidenced by statistics, the expert assured. European market is filled with products of Spain and Italy, so Polish apples, which is used to bring considerable income to farmers and to the state, now proved useless.

The Polish authorities have long taken an anti-Russian political course, not only in food but also in the energy sector, as previously reported, “Politekspert”….