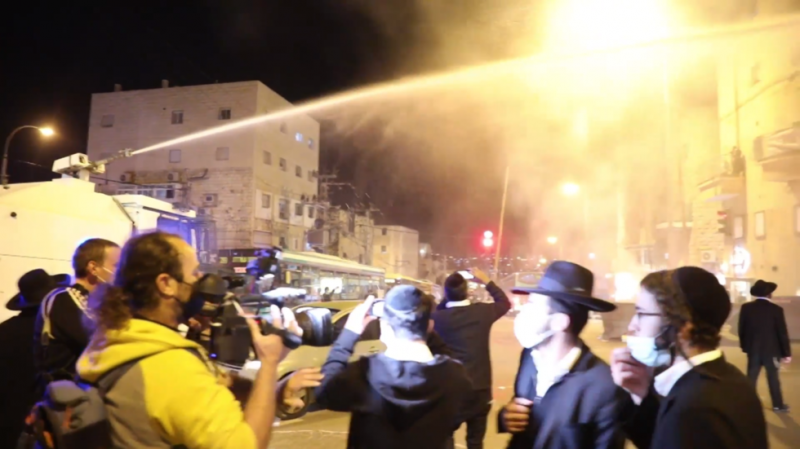 Hundreds of men from Haredi neighborhoods gathered on Tuesday night to demonstrate against Israel’s public health measures, specifically the shuttering of schools and seminaries, known as yeshivas. The event started peacefully, with protesters listening to speeches from community leaders. The crowd was seen holding signs that read “stop persecuting religion in the Holy Land,” and “Closing education institutes — stabbing us in the heart,” the Jerusalem Post reported.

However, once the rally concluded, demonstrators poured into a nearby street and began brawling with police.

Footage from RT’s Ruptly video agency shows burning dumpsters in the streets as the mob of ultra-Orthodox Jews blocked traffic. Firefighters were called to the scene to extinguish the blazes.

According to local media reports, demonstrators began hurling stones and other projectiles at officers. Israeli security personnel eventually deployed water cannons, sending the black-robed protesters running for cover. At least one person was detained in connection to the unrest.

Haredi communities have been among the hardest-hit by coronavirus in Israel, but their opposition to lockdown measures seems to have only grown in intensity. Ultra-Orthodox neighborhoods in Jerusalem and nearby cities have been rocked by regular protests against school closures and other restrictions, with the protests typically spiraling into violence. Recently, several large Haredi funerals were held for rabbis who died of coronavirus in violation of the country’s rule limiting gatherings to 10 people. Some of the funerals were reportedly attended by more than 10,000 people, with mourners flooding the streets of Jerusalem, triggering condemnation from police and health authorities.