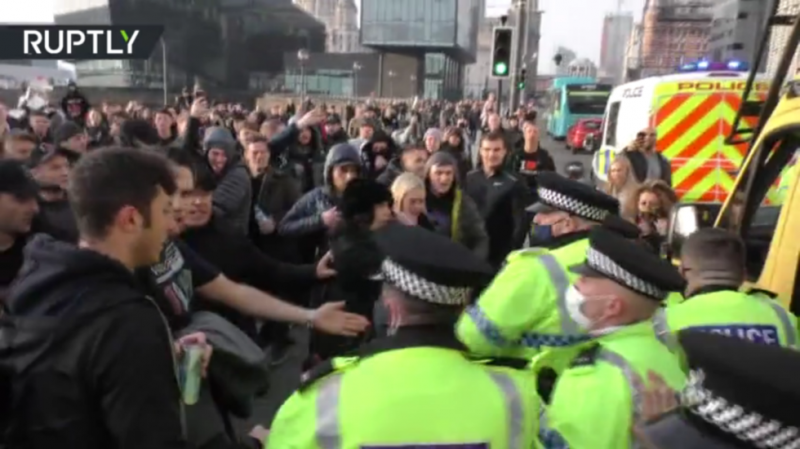 Between 300 and 400 people took part in a march denouncing the latest Covid-19 lockdown, according to police. The protesters did not wear masks and openly ignored social distancing rules.

A video by the Ruptly video agency shows the angry crowd involved in a tense standoff with police. At one point, an officer pepper-sprayed a protester in the face, while his colleagues charged at a group of demonstrators.

The demonstrators chanted, “Shame on you!” and “Choose your side!” Several were filmed being escorted away and put in a police van.

Two people were arrested, Merseyside Police said. One was taken into custody for attacking an officer. Another was found to be wanted on warrant when he was detained. Seven received anti-social behavior dispersal notices, and three others were fined for breaching Covid-19 restrictions.

The UK government has banned demonstrations of more than two participants during the month-long lockdown across England, which is set to last until December 2. Prime Minister Boris Johnson was forced to bring back tougher restrictions as the infection rate has been rapidly increasing in recent months.

The return of strict lockdown policies has triggered demonstrations by people who consider the measures excessive. Protesters in Liverpool also clashed with police last Thursday. On that occasion, at least three people were arrested following disturbances, and 13 were fined.