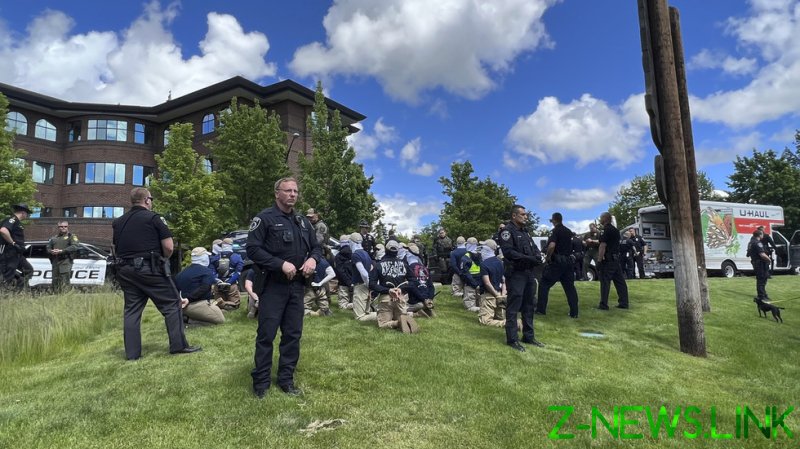 Authorities in Coeur d’Alene, northwest Idaho, announced they have prevented a mass turmoil on Saturday, following a tip from a concerned citizen who had informed them about a truck full of masked armed thugs looking “like a little army.”

A suspicious U-Haul truck was pulled over not far from Coeur d’Alene City Park, where a pride event was taking place on Saturday afternoon. Inside police found a group of men wearing similar khakis, navy blue shirts, balaclavas and hats – with arm patches and logos identifying them as members of the far-right Patriot Front organization.

One video posted on social media shows masked men standing inside the truck as police roll up the door. Other footage showed them kneeling on the grass with their hands zip-tied behind their backs as police proceeded to detain the group.

Inside the truck police also reportedly found riot gear, including shin guards and shields, at least one smoke grenade, and a document allegedly detailing their “operations plan.”

The suspects came from at least 11 different states and were all charged with a conspiracy to riot, with additional charges possible during the arraignment scheduled for Monday, authorities said. 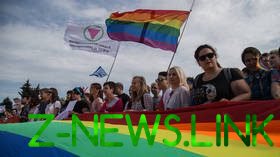 The Patriot Front branched out of Vanguard America in 2017 when a man allegedly affiliated with the group rammed his vehicle into a group of counter-protesters during the Unite the Right rally in Charlottesville, Virginia, killing a woman and injuring dozens more. The Anti-Defamation League and the Southern Poverty Law Center describe the Patriot Front as a racist, neo-fascist hate group, which, among other things, espouses the preservation of white Americans’ racial purity and the dismantling of the “dysfunctional American democratic system.” To date, the group’s main areas of activity have been the distribution of its messages, both online and in the street, as well as the holding of marches and the staging of flash mobs.