The video shows more than half a dozen officers backing out of the Catholic Notre Dame church in Nice as numerous gunshots ring out. Four men remain clustered in the doorway, while one runs toward the street before walking back.

Officers, including several orange-vested ambulance crew, are subsequently seen wheeling the wounded attacker to an ambulance on a gurney.

The confrontation unfolded on Thursday after a man attacked three people with a knife inside the church. Police later identified the suspect as 21-year-old Tunisian Brahim Aouissaoui.

The perpetrator was described by President Emmanuel Macron as an “Islamist terrorist.” France’s chief anti-terrorist prosecutor Jean-François Ricard announced later Thursday that the attacker had moved toward the officers in a threatening manner before four of them shot at him.

Ricard said that the suspect, who was taken to the hospital following his capture, illegally entered France earlier this month from Italy and is originally from Tunisia. Terrorism prosecutors from that country are also investigating the incident.

Two of the victims – a 60-year-old woman and the 55-year-old church keeper – had their throats slit and died inside the church, Ricard told reporters, while another woman managed to escape before later succumbing to her injuries. Several others were reportedly injured.

Aouissaoui reportedly shouted “Allahu akbar” repeatedly in the aftermath of his bloody crime, continuing even after he was sedated, according to Nice Mayor Christian Estrosi.

Macron has declared France is “under attack” by Islamic terrorism and has stepped up soldiers’ patrols of churches and schools. Earlier this month, a Chechen Muslim beheaded history teacher Samuel Paty several days after he showed students a cartoon of the Prophet Mohammed. 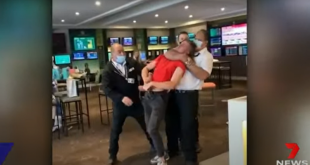 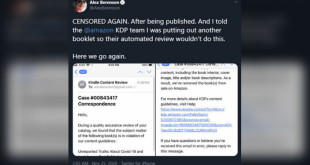