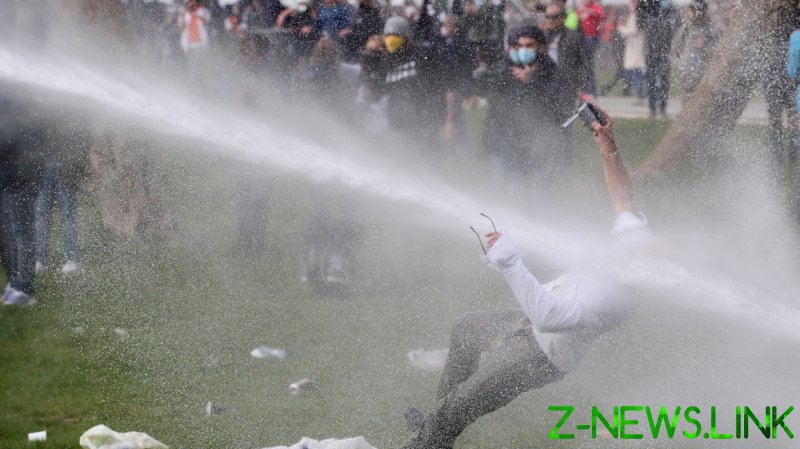 Last month’s April Fools ‘La Boum’ party drew thousands of people to a nonexistent concert in the Belgian capital of Brussels, for a gathering that turned into an impromptu protest against the country’s coronavirus restrictions. Police cracked down hard on the gathering, and shocking video footage showed mounted cops mowing participants down to the ground.

The revelers returned to the La Cambre woods on Saturday to show their displeasure with Belgium’s ongoing restrictions. While the country’s lockdown was relaxed last month, strict limits on gatherings remain in place.

The crowd danced and cheered, but their celebration was short-lived. Police soon descended on the park and ordered the protesters and partiers to leave.

Those who stayed were met with a startling display of police power. Tanker trucks drove at high speed toward the gathering, blasting the protesters with jets of water as they parted the crowd.

It is unclear how many people were injured or arrested. AP reported at least one person being taken away by ambulance, while De Morgen claimed that a man was unconscious after being hit with a water cannon. Police claimed on Twitter that the man was not hit by the vehicle itself, but by the jet of water. La Libre also reported that one person had been struck by a police vehicle, though it is unclear whether this is the same man.

Driven away from the park, some participants lit fires nearby, drinking and chanting as they threw fuel onto the flames.

Though the protest followed the same format as last month’s party, it took place on May Day, traditionally a day of left-wing protest worldwide. France saw protests in multiple cities, with police in Paris and Lyon baton-charging crowds of rowdy rioters, some of whom smashed windows and pelted officers with projectiles.