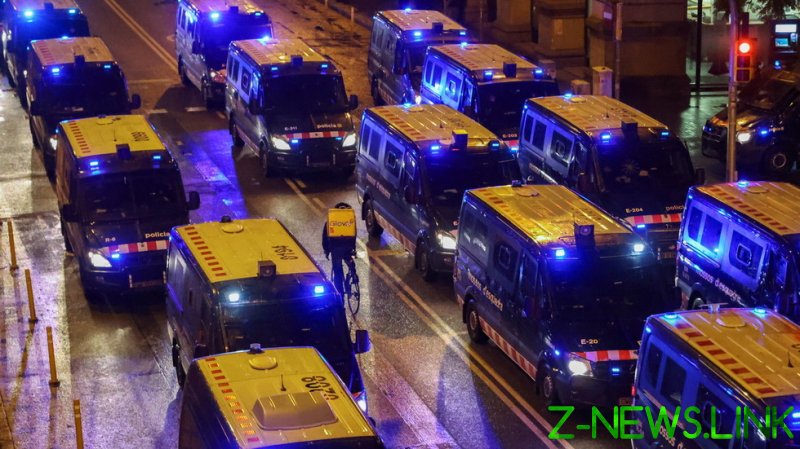 Protesters pelted police with bottles and stones and torched refuse containers in the town of Vilanova i La Geltrú, in the province of Barcelona, according to a police statement on Wednesday night.

Police said protesters were brandishing fire extinguishers, and urged locals to stay away from “violent groups” near an art school in the town for their own safety.

Protests also took place in the Catalan town of Manresa to the north of Barcelona, where crowds gathered near a police station and reportedly hurled firecrackers at officers’ vans.

More protests were held in Barcelona as the city’s football team hosted Elche in La Liga at Camp Nou stadium.

However, much of Wednesday’s unrest was markedly more peaceful than previous nights in the Catalan capital, with pro-Hasel supporters filmed singing and clapping in videos posted to social media.

Riots in Barcelona over the last week have seen the fires burning in the streets, police attacked, shops looted and banks broken into, while one woman protester lost an eye after she was reportedly struck by a cop’s rubber bullet. In total at least 110 people have been arrested amid the protests.

Hasel was jailed last week over some 60 tweets in which he praised Spanish terrorist groups, accused the police of torture and insulted the country’s disgraced former king Juan Carlos, who faces corruption allegations. From his jail cell he has continued to call for people to take to the streets to protest his arrest, although the trouble has died down in the last couple of days.