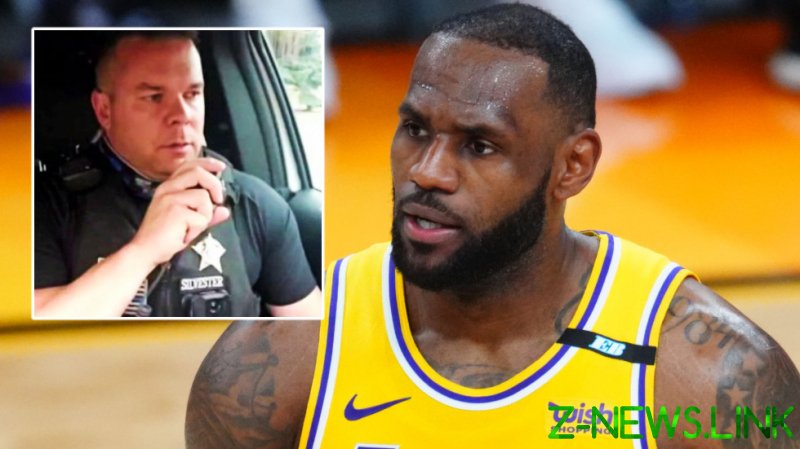 Nate Silvester headed to social media platform TikTok regularly while still employed as a police officer in Bellevue, Idaho to voice his opinion on pressing issues related to law enforcement.

In one video aimed at James, there was a nod to the Lakers star’s criticism of a police officer who shot dead a black female teenager in Columbus, the capital of his home state Ohio, in April.

James, who comes from Akron, went on Twitter at the time and caused outrage by uploading a photo of the officer with a caption that read “YOU’RE NEXT #ACCOUNTABILITY” alongside an hourglass emoji.

Clearly irked by this, Silvester starts his clip by saying: “LeBron, hey, yeah it’s me again. Listen, I’m out here at this disturbance call and there’s a guy trying to stab another guy with a knife. What do you think I should do?”

Pretending to be in conversation with the court veteran, Silvester continues: “Okay, well, they’re both black. One guy is trying to stab another guy with a knife. Deadly force is completely justified.”

“I mean, that doesn’t make a whole lot of sense – but then again, you’re really good at basketball so I guess I’ll take your word for it.”

“Michael Jordan is the GOAT,” he finishes, doubting LeBron’s sporting credentials in the debate over the greatest basketball player of all time.

Silvester was swiftly relieved of his duties shortly after the outburst, with local mayor Ned Burns explaining his punishment.

“During the week of May 20th, while on shift, Deputy Marshal Silvester violated several clearly established City of Bellevue and State of Idaho Policing policies,” he wrote on Facebook.

“After his previous policy violations, Deputy Marshal Silvester was placed on probation and was on what is called a ‘last chance agreement’ with his superior officers. Because of his continued policy violations, the Marshal has terminated Mr Sylvester, effective May 27th, 2021.

In an appearance on a Fox News TV show, Silvester told host Sean Hannity that, rather than being punished for his conduct, he is instead “the latest target of cancel culture”.

“None of my other videos that depicted me in my uniform or involving body camera footage, none of those mattered. They didn’t care about those.

“It wasn’t until my LeBron James TikTok struck a political nerve that they started to pay attention and complain about it and came up with forms of discipline.”

Burns said that Silvester’s policy violations had “nothing to do with the tone or the tenor of his speech that he posts online.”

“He was not terminated for the content of his speech,” clarified the leader. “He was terminated for his failure to follow clearly laid out and well established policy.

“The decision was solely made by the command structure within the Bellevue Marshals office and was not influenced in any way by me or by the City Council. We were informed of the decision and, as in the previous incident, left the final decision making to the Marshal and Deputy Marshal.

“The City Council and I respect the way the Marshal runs her department and we are supportive of the decision that was made in regards to consequences for not following policy. We wish Mr Silvester the best and we ask for calm and understanding.”

Hannity has advised Silvester to “sue their asses off”.

But even if he continues to be unemployed, Silvester, who also claims to have penned a deal with Di Angelo Publications for his ‘Never Off Duty’ book, will not be hard up any time soon.

His friend, Gannon Ward, has set up a GoFundMe for him to “recover his pay” after being suspended without it, and reckons Mayor Burns was “gunning” to have Silvester dismissed.

The fund had raised $540,000 and counting within days of the controversial decision.