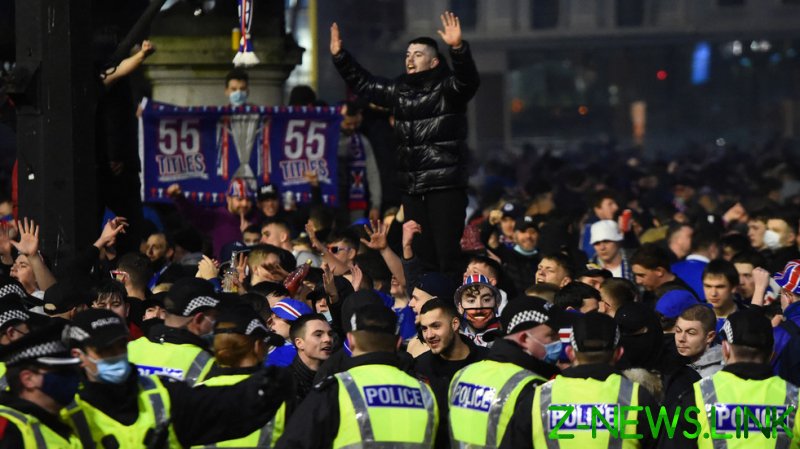 John Scott QC, chairman of the independent advisory group on law enforcement during the coronavirus crisis, ruled that a decision by Police Scotland earlier this month to avoid confrontation with football fans flouting pandemic rules was proportionate and within the law. The force had come under fire from some politicians for standing on the sidelines while supporters of Rangers FC ignored social distancing measures and destroyed property.

Scott defended the tactics, citing evidence that “heavy handed policing can actually provoke crowd conflict,” and warning that scenes of tough crackdowns by authorities could inflame tensions online and across society.

At the same time, the top lawyer said that scrutiny from media outlets meant that violence doesn’t go undocumented. However, according to him, the journalists leading the charge against violations aren’t actually British broadsheets or well-read daily newspapers.

Instead, “hostile foreign media – most obviously RT – are apt to provide live coverage of sensitive events and to amplify the grievances of any disaffected group,” Scott said. Clashes with police, he added, could supposedly be used for propaganda purposes. The advocate chose not to outline the difference between dangerous info-wars content and standard media scrutiny as governments face unprecedented pressure during the pandemic.

In its coverage of the comments, the Times of London notes that RT works with prominent Scottish figures such as former first minister Alex Salmond and ex-Labour MP George Galloway. Its report adds, however, that the state-backed outlet “is used by the Kremlin to destabilize Western democracies by aggravating rivalries, such as Brexit in the UK.”

However, commenting on the allegations, Galloway mocked the idea that the channel was trying to sow discord in the West. “I’m so keen to destabilize Britain,” he said, “that I’m spending every waking hour trying to save Britain from break-up secession and partition. Ceaselessly, on RT!” The former Labour Party MP is a strong opponent of Scottish independence.