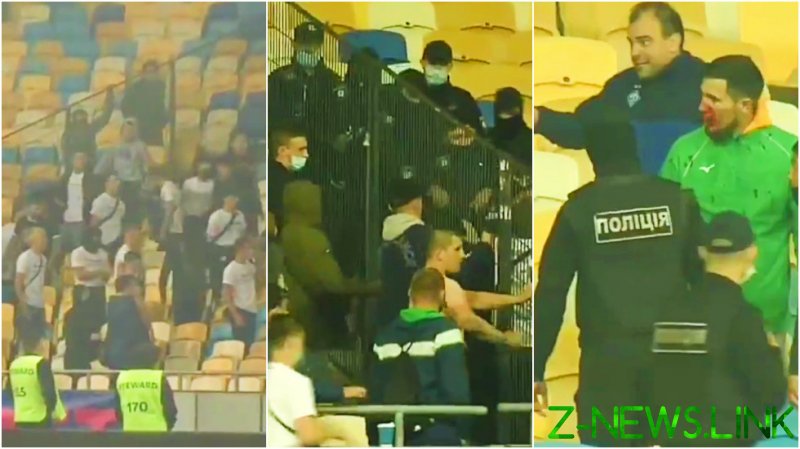 Violent footage has emerged of the scrap during Dynamo’s match with Oleksandriya on Saturday, appearing to show ‘ultras’ – the hardcore section of support – charging towards a segregation fence at the 70,000-capacity NSC Olimpiyskiy.

The clip shows a man with his face and jacket covered in blood, while blood can also be seen on several seats in what is said to have been a family section.

According to one account that posted the footage, some spectators had “made a remark to others regarding the cessation of the use of fireworks.”

Dynamo appeared to confirm that suggestion in a statement, responding by saying that a “large group of people” in the section “lit pyrotechnics”.

“Fans of the neighboring sector made legitimate verbal remarks to them that such actions could harm and cause discomfort to children and other spectators in [a nearby] sector,” it said.

“In response to this request, there was an aggressive, unacceptable reaction from members of the fan group. It manifested itself in the commission of physical violence against some spectators, [and] their beating by a group of people in front of a large audience of the match, including viewers.

“Only after the intervention of the police was this offense stopped. Individuals have been identified and detained for drafting procedural documents.”

The club, which will host Barcelona and Bayern Munich in the Champions League this season, said that the “hooligan actions” had violated the law and had been “clearly recorded”, with the photos and videos sent by stadium management to police in Kiev.

“We hope that law enforcement agencies will give a proper legal assessment to the aggressive actions of the perpetrators and bring them to justice for the crime,” it said.

“FC Dynamo clearly states its steadfast position on the inadmissibility of any acts of violence at the stadium and the inevitability of punishing violators of the law.

A police statement said that special forces had been sent to the section as soon as they were informed of the trouble, with four people coming forward with allegations of injuries “of varying severity” so far.

“The efforts of police officers are aimed at identifying and bringing to justice all those involved,” it said, explaining that hooliganism charges were being investigated which carry up to four years’ imprisonment.