Home / policy / Police in Tula have detained candidate, chained themselves at the Presidio

Police in Tula have detained candidate, chained themselves at the Presidio 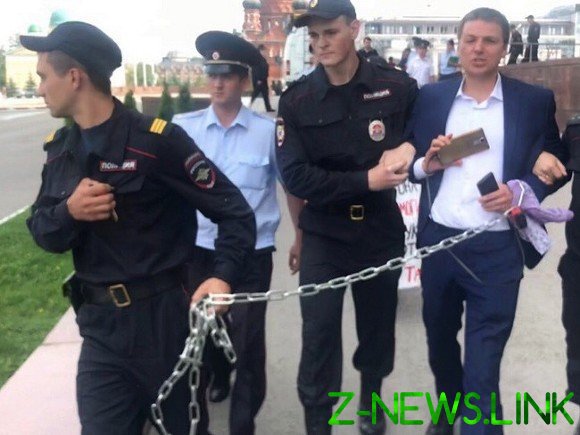 The police arrested the candidate in deputies of the Tula regional Duma Yuri Koretsky. As reported the correspondent of “Rosbalt”, the representative of regional Communist party Vera Serebrovskaya, the candidate has withdrawn, along with the chains with which he chained himself to the fence plates.

Yuri Koretsky had intended to hold a hunger strike at the office of the President, demanding to stop the lawlessness during the election campaign. He was approached by some provocateur with his poster, and then the police said that this is not picket. The chain, which Koretsky was prikololsya, was thwarted. It was later sawed the staff of service of rescue.

Candidate can now blame the uncoordinated mass picket. He fears that in the case of administrative arrest, he will be “excluded” from the election campaign.

Recall that the candidate Yuri Koretsky declared a hunger strike and chained themselves to the fence at the President’s reception. So he protested against the campaign of pressure on candidates from the Communist party. Earlier, unknown assailants attacked him in Aleksin. Wednesday in Donskoy unknown attacked the candidate raysobraniya Stanislaus Sidana.