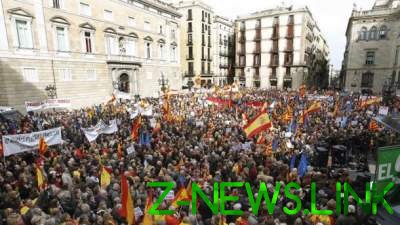 Nearly half a million people called for the unity of the region.

In the capital of the Spanish Autonomous communities of Catalonia, Barcelona in a rally for the unity of Spain and against the separation region has reached at least 350 thousand people.

But the organizers of the rally, the group Societat Civil Catalana, said that on the streets about 1 million of the Catalans.

The demonstrators staged a March along Central streets of the city with Spanish and Catalan flags with slogans for a United Spain.

“The unity of Spain cannot be voted or agreed upon — it must be protected,” said one of the organizers.