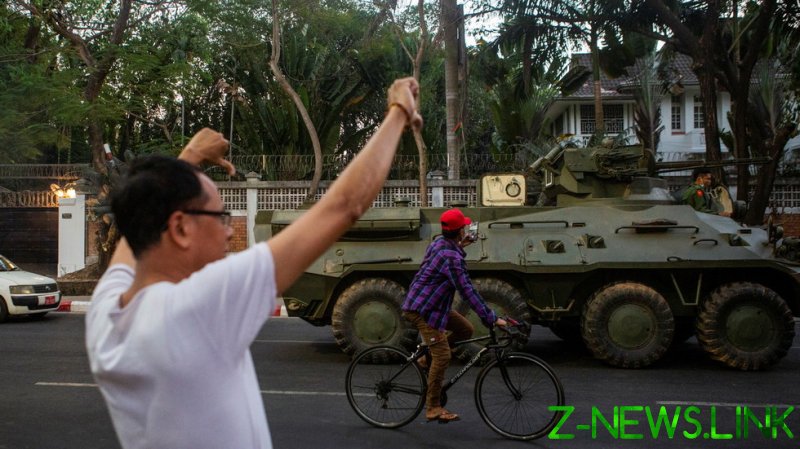 Dozens of protesters faced off with riot police at a power plant in the city of Myitkyina on Sunday. The city is located some 1,480 kilometers from capital Yangon in the northern part of the country, which has been gripped by protests against the military rulers since the February 1 coup.

There were reports that the military was also deployed to quash the unrest. The altercation in Myitkyina reportedly ensued after the authorities demanded the company, running the plant, cut off electricity.

The purported video of the showdown shows the demonstrators flee in disarray amid a series of loud blasts and accompanying flashes.

There have been conflicting reports if live ammunition or rubber bullets were used in the crackdown. Police have also reportedly fired tear gas, smoke bombs and used water cannons in a bid to disperse the protesters.

BBC reported that five journalists were arrested amid the chaos.

Shortly after the events in Myitkyina, monitoring group NetBlocks Internet Observatory reported“a near-total internet shutdown” in the country. The group blamed the outage on the “state-ordered information blackout,” noting that the levels of national connectivity across the country dropped to some 14 percent of normal levels overnight.

The connection was restored around 9 am local time [02:30 GMT] on Monday. However, according to NetBlocks, most of the residents still could not access social media.

A dozen of western embassies, including that of the US, the EU, UK,  Canada, Germany and France urged security forces to “refrain from violence against demonstrators and civilians,” referring to the detention of State Counsellor Aung San Suu Kyi and the declaration of a one-year state of emergency by the military “an overthrow” of the legitimate government.

“We support the people of Myanmar in their quest for democracy, freedom, peace, and prosperity. The world is watching,” they said in the statement on Sunday.

The current wave of protests – the largest Myanmar has seen since the 2007 crisis – has drawn thousands of people, demanding the release of Suu Kyi and the return of the civilian government to power. The generals declared emergency and detained the 1991 Nobel Peace Prize recipient on February 1, accusing the civil government of failure to investigate what they deem a rigged general election in which Suu Kyi’s National League for Democracy Party (NLD) claimed a resounding victory in November.

Suu Kyi was placed under house arrest after police said they found non-authorized walkie-talkies at her home. While her detention was originally set to expire on Monday, her lawyers said that she would be remanded till February, 17.