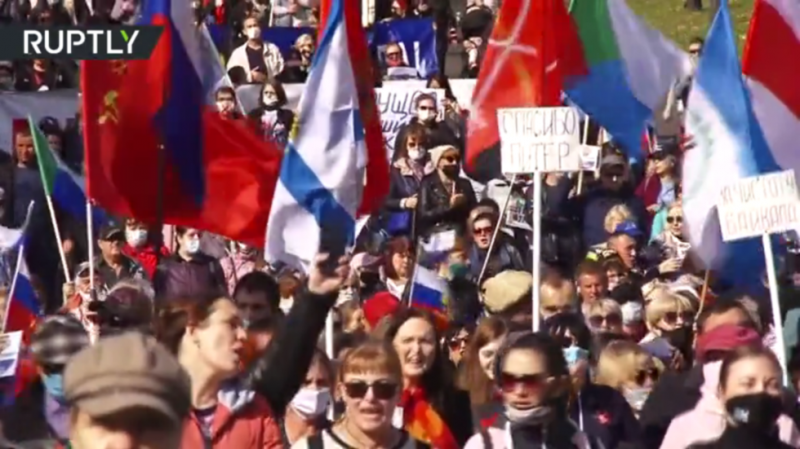 Locals unhappy with the circumstances around the arrest and sacking of Sergey Furgal, a member of the far-right opposition LDPR party, have been staging protests in the city since July They began after his career as a popular governor was torpedoed by a criminal investigation. Each Saturday a progressively larger gathering was held, with smaller protests organized during workdays.

The protests, which were unauthorized from the start, eventually petered out, and in recent weeks they have attracted a fraction of the initial crowds. Rather than a broad coalition of various factions, the movement seems to have been hijacked by Soviet-nostalgists and patriots of the region.

25 people were arrested at the latest rally on Saturday, the first to be limited by police action, according to authorities. Local media reported a confrontational atmosphere at the demonstration from the outset. Anywhere between 500 and 1,000 people marched through Khabarovsk, according to different estimates.

The mood deteriorated further when the protesters reached Lenin square in the city center, where the regional government building is located. They began to set up tents on a lawn, saying they were there for a permanent sit-in.

Law enforcement warned the demonstrators to stop, but that was ignored. At this point, police then used force against them. Despite the clashes, several hundred protesters remained in the square for hours after the unrest.

Furgal was elected governor of Khabarovsk Region in 2018 in a landslide victory. He was arrested in July, of this year, on suspicion of ordering three murders in the mid-2000s, leading to his removal from office weeks later by a presidential decree. He denies the accusations and remains a popular figure in the city.

Initial protests in Furgal’s support attracted tens of thousands of people, which is an impressive achievement in a city that has about 600,000 residents. Much of that momentum, however, has been lost over the last three months.