Home / Video news / Police detained a resident of Mariupol that threatened to strangle his wife and child. Video

Police detained a resident of Mariupol that threatened to strangle his wife and child. Video 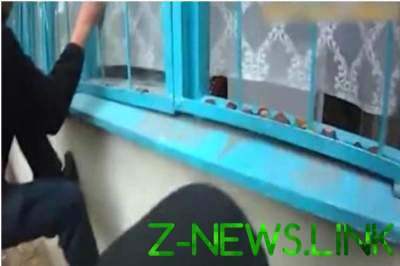 The police decided to get into the apartment through a balcony.

After a few minutes after receiving a call on a scene there arrived police. Near the entrance of his apartment block they met the applicant.

“A woman explained that her friend called the man and threatened to strangle their 7-year-old daughter, and a child at that time was in the apartment with his father. In front of an embarrassed man bridesmaids just hair dragged his wife to the door, said the police. – From the apartment window on the third floor have heard children’s cries for help. The patrol tried through the window and doors to communicate with the citizen and to persuade him to release his wife and daughter. However, the man did not go to the contact, and even forbade his hostage closer to the Windows so that law enforcement officers made sure that they were all right.”

See also:  The cyclist drove at a speed 90 km/h Video

The police decided to get inside through the balcony. One crew remained at the front door, the second controlled the situation from the yard, and the patrol with the third crew climbed the balcony of the first floor and slowly began to climb up. Deftly reaching the third floor, they said the likely offender to open the window, but he didn’t react. Then police broke the window glass and got inside.

See also:  A resident of Kharkiv jumped from the 9th floor

After a few seconds, 36-year-old was in handcuffs. After that the police became convinced that life and the mother with the child is not in danger. Militiamen calmed them. For details of all the participants of the event delivered to the police station.