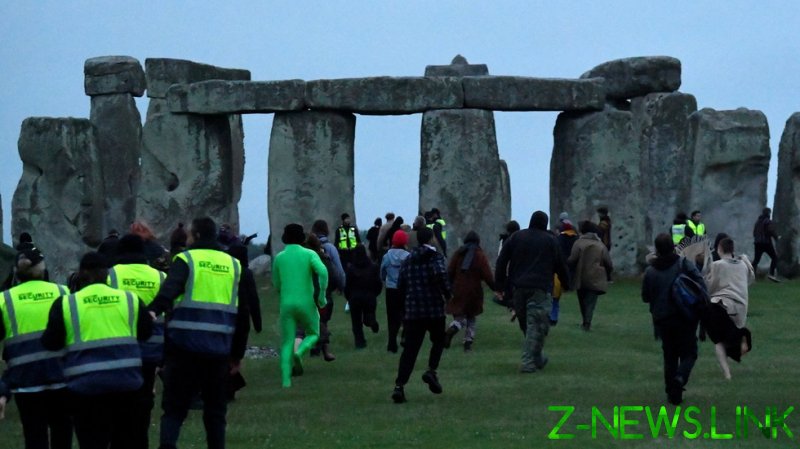 The event, which usually draws tens of thousands of people to Wiltshire, was cancelled this year over safety concerns after the UK government postponed the end of Covid restrictions. However, dozens still scaled the fences erected around the location in order to mark the occasion at the historical site.

At around 4:50am, the livestream of the sunrise was cut by English Heritage and police arrived to disperse the roughly one hundred people gathered inside the iconic stone circle.

As police proceeded to move towards the monument in an attempt to peacefully disperse the crowd, one protester could be heard shouting about the legality of the unauthorised gathering.

Once the police had dispersed the crowd, the livestream of the event began again, showing a mostly cloudy sky. Ed Shires, who hosted the online event, apologised for the disruption to the feed, chastising the “disappointing” actions of those who broke the rules.

English Heritage had been preparing to welcome people back to Stonehenge for the summer solstice until the government’s recent announcement that there would be a four-week delay to the end of England’s lockdown restrictions, pushing the curbs into July.

Following the incident, the police stated that one arrest had been made, of a woman suspected of being drunk and disorderly, but she was later released with no further action having been taken.

The summer solstice is the longest day of the year, occurring between June 20 and 22 in the northern hemisphere. Traditionally, crowds gather at Stonehenge, as the 5,000-year-old monument’s Heel Stone aligns perfectly with the sun at dawn, which beams into the middle of the structure. With the event an important date for both pagan and druid groups, had it not been for Covid restrictions, thousands would have been expected to have attended to celebrate the day.