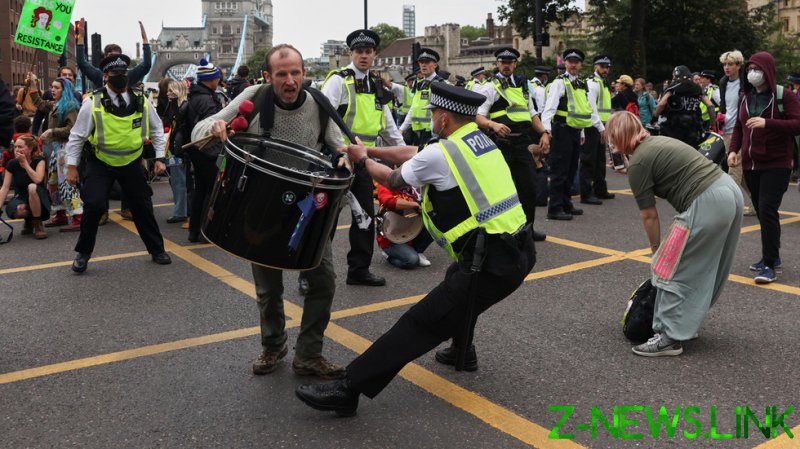 Activists from the climate action group blocked traffic on the famous London landmark, using a van and a caravan as part of their demonstration.

As well as pressuring the government to provide “an emergency response” to the threat of global warming, the group also sought to highlight concerns about its investment in fossil fuels, with protesters donning aprons that read “Tell The Truth,” as they brought traffic to a standstill across Tower Bridge.

The Metropolitan Police responded in force to Extinction Rebellion’s action on the iconic structure on Monday, tweeting a statement saying “officers were on scene almost immediately” and working “to get traffic moving again.” However, officers also warned that a second group of activists were lying down in the middle of a high-traffic junction near the bridge, which will cause “further disruption.”

The group’s demonstration was part of its ‘Impossible Rebellion’ protests which are entering a second week, having begun on August 23. More incidents are expected to occur throughout this week, with an event staged by XR on Sunday ending in 34 arrests, according to the Metropolitan Police.

In a statement, Extinction Rebellion defended its actions, declaring that “the climate emergency demands an emergency response,” adding that “this government is pushing us over the brink,” forcing the group to engage in demonstrations like the one on Tower Bridge.

Earlier in the day, the Met Police shared footage on their Twitter account proudly stating that they had “disrupted an attempt by Extinction Rebellion to block a road,” and declaring that they are predicting “where activists might strike” and “taking immediate action.”

The Tower Bridge protest follows a similar demonstration outside London’s Science Museum on Sunday, where the group were opposing the institution’s ties to oil and gas giant Shell.