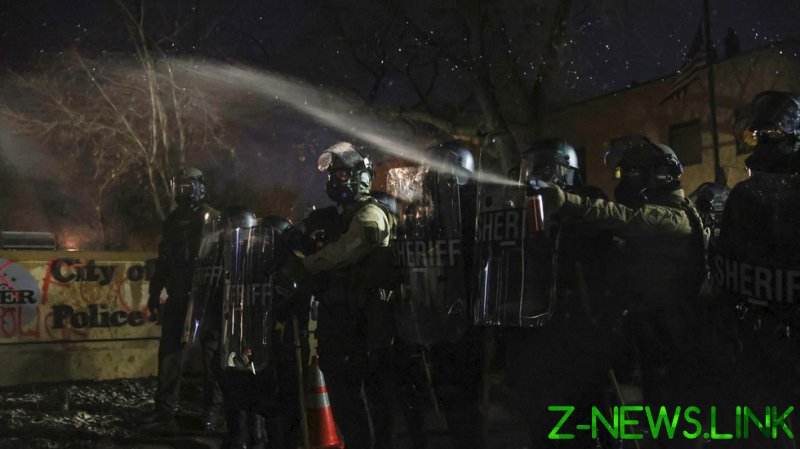 For the third night in a row, protesters rallied outside the police station, chanting Wright’s name and “Black Lives Matter,” as police sought to disperse the “unlawful assembly.”

A stubborn crowd rallied outside the police station despite the near-freezing temperature and light snow.

As police fired smoke and gas grenades into the crowd, some activists tried putting plastic buckets and traffic cones over them. Over the loudspeaker, officers called for media and press to “leave the area now.”

The Twin Cities and the surrounding jurisdictions have declared a curfew effective 10 pm local time on Tuesday and ending at 6 am.

One video from the scene showed a line of officers rushing and arresting a group of activists who were kneeling on the ground and chanting.

Some of the protesters brought umbrellas and tried to set up a “shield wall” previously observed in Hong Kong, facing a line of state troopers wearing riot armor and armed with batons. One activist carried a shield with ‘ACAB’ (All Cops Are Bastards) graffiti on it.

Protests in Brooklyn Center, a community northwest of Minneapolis, first erupted on Sunday after a female police officer shot and killed 20-year-old Daunte Wright, an African-American man, during a traffic stop.

The officer, later identified as Kim Potter, “accidentally discharged” her firearm into Wright when he slipped away from her partner and tried to escape in his car, police said after releasing body camera footage of the incident. She was giving a “taser” warning and believed to have been using her stun gun instead. Wright had an outstanding warrant for a gun violation. Potter has since resigned, but protesters are calling for her to be criminally charged.