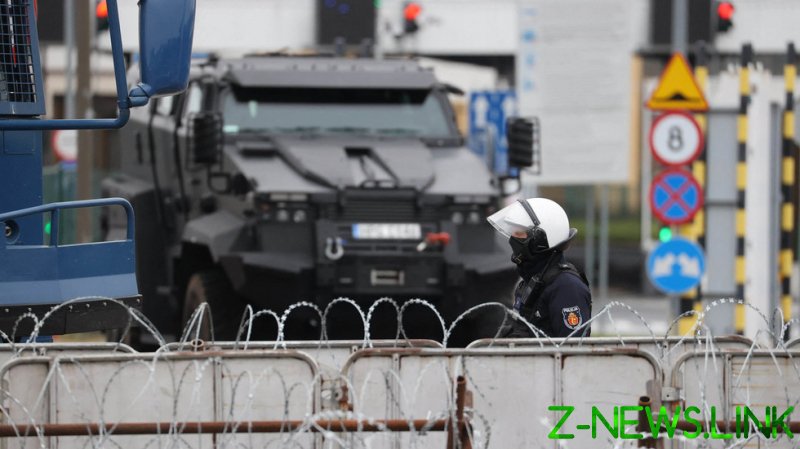 “We are ready to use an ‘escalation ladder,’ which means closing more [border] crossings, shutting down transit and trade opportunities, in order to exert economic pressure on the Lukashenko regime,” Polish Prime Minister Mateusz Morawiecki said during his trip to Estonia on Sunday.

Morawiecki said his country had already decided to close the Kuznica border crossing, where up to 4,000 mostly Middle Eastern refugees camped out and tried to break into Poland.

Would-be asylum seekers began gathering on the Belarusian side of the border earlier this month, braving the cold weather. At times, refugees pelted border guards and police with stones as Polish authorities responded with water cannon, tear gas, and pepper spray. At least 13 refugees died during the standoff, mostly due to exposure.

The EU broadened its sanctions on Minsk this week, accusing Belarus of using refugees as part of its “hybrid attacks” against the bloc. The Polish PM said on Sunday he wants to give Lukashenko “a chance to step back and have the migrants returned to their countries of origin.”

The Polish Border Guard said on Thursday that the refugee camp had largely been cleared, but reported on Sunday that around 100 people had again tried to breach the border.

Lukashenko told BBC on Saturday that he had stopped detaining migrants on the border “because they’re not coming to my country – they’re going to your [countries].” At the same time, he acknowledged that some Belarusian officials may have helped migrants to get into the EU.

“But I didn’t invite them here. And to be honest, I don’t want them to go through Belarus,” Lukashenko said, adding that Western countries had stopped cooperating with Minsk on migration.