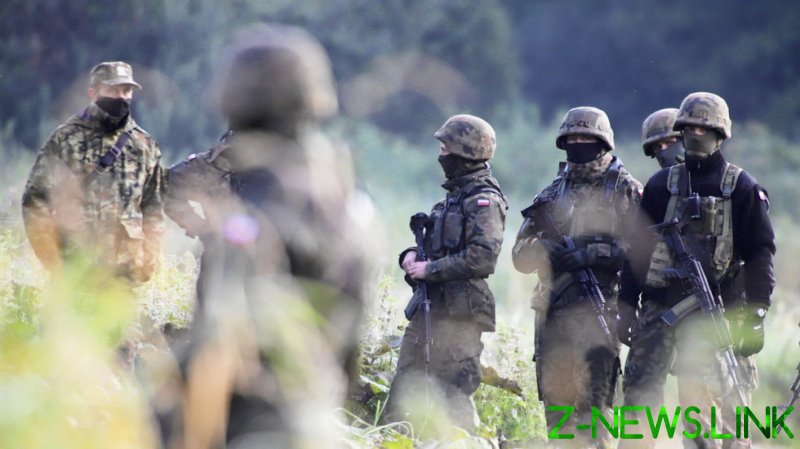 The fall of the US-backed Afghan government and the Taliban takeover have triggered a new torrent of refugees seeking to escape the warzone and reach the European Union. The Belarus route has become one of the migration hotspots, prompting a flurry of accusations against Minsk raised by its EU neighbors.

The ongoing influx “qualifies as a hybrid attack against Lithuania, Latvia and Poland,” the nations bordering Belarus said in a joint statement on Monday, claiming that it “was planned and systematically organized” by Minsk. Lithuania, Latvia, Estonia and Poland were referring to the stream of migrants, mostly from the Middle East and Asia, they have been experiencing in recent weeks.

Poland has already begun erecting a border fence 2.5 meters (8.2 feet) high to prevent the migrants from getting in. Latvian President Egils Levits said this country might follow suit if the situation at the border remains the same, having already declared a state of emergency at the Belarus border and empowered guards to physically remove the unwanted arrivals.

The allegations against Belarus, however, do not hold any water, given that the new migrant crisis did not originate in Belarus and certainly was not somehow artificially fanned by Minsk, believes Bricmont, a Belgian professor, writer and political commentator.

“The main problem is the humanitarian catastrophe in Afghanistan, which is entirely the fault of the United States and of NATO,” Bricmont told RT. “It’s totally inconsistent, unbelievably hypocritical beyond belief, the attitude of the West. They have created this chaos in Afghanistan, not only because of the prolonged war which they lost, but also the way they’ve pulled out has created chaos.”

The hasty building of border fences has exposed an utmost “hypocrisy” not only of Poland or Latvia, but of the collective West as a whole, Bricmont believes. Such a hypocritical stance makes the Belarus border crisis very unlikely to be solved by dialogue.

They’ve put themselves in a situation where dialogue is impossible. It is the same reason that they went to Afghanistan, they’ve taken to a high moral ground – we’re defenders of human rights. But if you’re a defender of human rights why not to take more refugees?

All the talk about the efforts of the West to try and “help” Afghanistan and the Afghans appears to be quite morally ambiguous as well, Bricmont believes.

“You have to know what you mean by ‘helping Afghans’. The first thing that they could do to help Afghans is not to block all the money from the Afghan national bank which is in the American banks,” he said. “They were foolish to put them there. But anyway, once it’s there it is now confiscated.”

Earlier this month, the US froze nearly $10 billion in assets kept in US-based institutions and belonging to the Afghan central bank ostensibly to stop the Taliban from claiming these funds.

So far the US and other western nations are focused primarily on rescuing Afghan “collaborators,” which is quite a common thing to do for fleeing occupiers after the regime they supported collapses, Bricmont said. Similar approach was shown by Nazi Germany after the fall of Vichy regime, by France in Algeria, the US in Vietnam and so on, he added.